Brain Donation for Mental Health Research: Why Do We Need Healthy Brains?

We usually don’t think about our brains when considering organ donation. We are more apt to think about how our other organs, such as the kidneys, lungs, or heart, could potentially save the life of another person.

A donated brain, however, also has tremendous potential to help others. Through research, donated human brains have helped us achieve great gains in furthering our understanding of diseases such as autism, schizophrenia, bipolar disease, Parkinson’s disease, and Alzheimer’s disease. These advances, in turn, are being used to develop new treatments and help our search for cures.

Historically, McLean Hospital’s brain bank, the Harvard Brain Tissue Resource Center, has had good success in getting brain donations from people with brain disorders. These include the disorders named above and many others, such as Huntington’s disease and other types of dementia. We have typically struggled, however, with getting a sufficient number of healthy brains.

Why are healthy brains important?

People not affected by a brain disorder are among our most precious donors. There are two very important reasons for this. One is that healthy brains are needed as a comparison. If you don’t have healthy comparison brains, you can’t effectively study how brains of people with psychiatric or neurological disorders are altered.

As with other organs, there are changes in the brain of a person who has a brain disorder. In order to determine which changes are associated with a disease, we need to compare diseased tissue with healthy tissue. For each study, several brain samples are needed from each group—diseased and healthy. These comparisons are critical for reliably establishing disease patterns and statistical validity of research findings. There is a great need, therefore, for a large number of brain donations from people both with and without brain disorders. 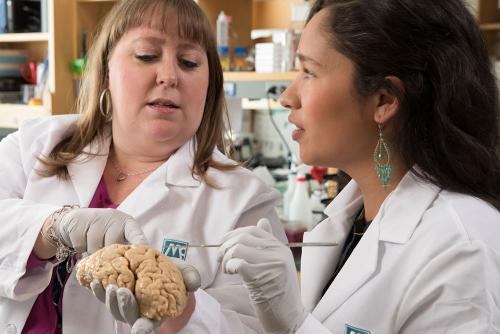 Another important reason healthy brains are precious is that we do not know nearly enough about the human brain. As methods to investigate it become more sophisticated, and allow us to study its cellular and molecular composition, we have unprecedented opportunities to learn more about the human brain.

In addition, it is important to remember that there are both similarities and differences in the brain of different species. For instance, the brain of a mouse is not simply a slightly smaller version of a rat brain. Clearly, differences between these two species and humans are even larger. Because studies on these species are critical to the understanding of human brain disorders, it is important that we understand how to compare findings in humans with other species.

Why are we struggling with obtaining healthy brains?

Awareness of the importance of brain donations appears to be the main issue. We have received hundreds of donations from people with brain disorders in the past few years, but far less from people with healthy brains. Families of people with brain disorders often feel very strongly about donating the brain of a deceased loved one to help support research. However, those same family members may not be aware that their healthy brains also could someday play a critical role in advancing the understanding of brain diseases, including their own loved one’s condition.

There also are cultural hurdles to donation for some people, including concerns about the body’s appearance after donation. We advise families that having an open casket is compatible with brain donation, as retrieving the brain does not affect outward appearance.

What is involved in donating a brain?

From retrieval to receipt, our donation system is very efficient, allowing us to receive a brain from any state within 24 hours of the donor’s death. We count on families to notify us of a donor’s death, and to work with us throughout the process.

Donating the brain of a loved one is always an important and difficult decision, one that the family needs to make under very difficult circumstances. It has a strong emotional impact on a family, one that we profoundly appreciate, making us even more grateful. The family’s help and commitment is critical, not only at the time of the brain donation but later on as well. We will need their assistance in collecting as much information about the brain donor as possible, such as medical records and the family’s own knowledge of the medical history.

A brain donation is a gift of knowledge to all of us, and it is of critical importance in furthering our understanding of devastating brain disorders. We encourage prospective donors to visit our website, to learn more about consent and other donation process details, and to talk to their family about donation.

Sabina Berretta, MD, is the scientific director of the Harvard Brain Tissue Resource Center at McLean Hospital and an associate professor of Psychiatry at Harvard Medical School. Her investigations are focused on the pathophysiology of major psychoses, testing the hypothesis that extracellular matrix abnormalities may represent a core feature of the pathology of these disorders.

T. Wilson Woo, MD, PhD, is the medical director of the Harvard Brain Tissue Resource Center at McLean Hospital and an assistant professor of Psychiatry at Harvard Medical School. He is interested in defining the nature of cortical circuitry disturbances in schizophrenia and other psychotic disorders, and in understanding the developmental neurobiological pathways that lead to these disturbances. Dr. Woo also focuses on translating research findings from the laboratory into novel, rational, and effective treatment and prevention strategies.

Reflecting on a Brilliant Career in Neuropsychiatry

END_OF_DOCUMENT_TOKEN_TO_BE_REPLACED

Predictors and Mechanisms of Symptom Change in Depression Treatment for Adolescents

Find Your Way Back From Burnout