Fact vs. Fiction: The Truth About Borderline Personality Disorder

Borderline personality disorder (BPD), a complex mental illness often characterized by unstable moods, behaviors, and relationships, has historically been viewed by clinicians as untreatable. An April 2015 article in The New York Times referred to BPD as “an intractable condition,” which is misinformation that persists about the disorder according to John G. Gunderson, MD, director of McLean’s Personality and Psychosocial Research Program and developer of the empirically- validated therapy general psychiatric management (GPM).

“Most psychiatrists actively avoid treating borderline patients and even avoid giving them this diagnosis because they think it’s so pejorative,” said Gunderson. “When the biological paradigm took over psychiatry in the 1990s, the training of most psychiatrists focused on treatment with medication for what we thought to be chemical imbalances. Because no medication has ever been shown to be particularly effective for BPD, psychiatry turned its back on this disorder, even when it was proven that these patients can be treated quite effectively.”

When dialectical behavior therapy (DBT)—a specific type of cognitive behavioral psychotherapy developed in the late 1980s—proved to be effective in treating BPD, “that certainly contradicted the prevailing myth that this was a disorder of people who were untreatable. What persists is that they’re not very treatable with medications, and that’s the part which unfortunately many psychiatrists have held on to,” said Gunderson.

Not only is BPD treatable it has a pretty good prognosis. “What’s remarkable,” Gunderson pointed out, “is that so few clinicians are trained to treat these patients.” 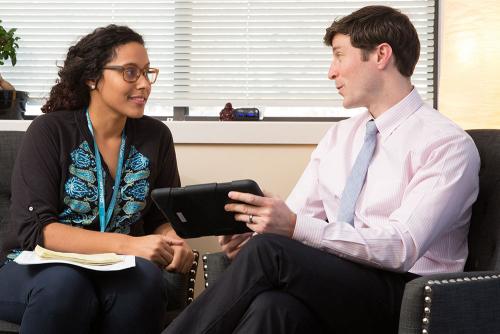 To address this problem, McLean launched the BPD Training Institute in 2013, thanks to philanthropic support. The institute teaches GPM and mentalization-based treatment (MBT), which focuses on helping people to differentiate and separate their own thoughts and feelings from those around them. During the past several years, McLean-sponsored GPM workshops have been conducted for clinicians and residents at different hospitals and universities throughout the country. Workshops provide interactive training exercises as well as a wide range of materials that clinicians and residents can bring back to their organizations.

Lois W. Choi-Kain, MEd, MD, director of the Gunderson Residence, an intensive, specialized residential program for adult women with severe personality disorders named after its founder, directs GPM training programs. Choi-Kain said that the most common response from clinicians who attend the workshops is that they are “more hopeful and clearer about what they can do at the entry level.”

“Part of the stigma is that clinicians would treat people with BPD with methods that worked for other disorders, and when those treatments didn’t work they blamed the patient and called the patient untreatable,” said Choi-Kain. “A more general approach like GPM teaches us that the first step is identifying BPD as something that is diagnosable. GPM is an organizational framework with which clinicians can approach these very complex patients.”

“An increasing number of institutions are showing interest in GPM and learning how to better address and treat this disorder, which we hope will raise more awareness and increase much-needed resources in addressing BPD,” added Choi-Kain, pointing out that Maine Medical Center is currently adopting the GPM framework into its teaching curriculum and establishing it as a standard of care across its affiliated mental health clinics. The BPD Training Institute is also working with clinicians in primary care and college mental health settings to implement the GPM framework and teach free courses throughout communities in Greater Boston, New York City, and the Northeast.

What Is Known About Irritability in Children and Adolescents?

END_OF_DOCUMENT_TOKEN_TO_BE_REPLACED

The Role of Self-Acceptance for Good Mental Health