Earlier this month, McLean Hospital researchers became the first to identify defined populations of neurons that are absolutely critical for the anxiety-reducing action of the widely used medication Valium®. This finding may have implications for developing more effective treatments for anxiety disorders, which are the most common psychiatric disorders in the United States.

“While one-size-fits-all pharmacological therapies are common for psychiatric disorders currently, the hope for the future is to come up with specific therapies that target the specific problematic behaviors and the disruptions in the neurocircuits underlying those behaviors for each disorder. This way the therapies will be more effective and there will be fewer unintended side effects,” said Elif Engin, PhD, of McLean’s Laboratory of Genetic Neuropharmacology.

Engin and her colleagues detail their findings in the paper “Modulation of anxiety and fear via distinct intrahippocampal circuits,” recently published in the online journal eLife.

While the findings do not have immediate implications for new therapies, senior author Uwe Rudolph, Dr med, director of McLean’s Laboratory of Genetic Neuropharmacology, notes it’s an exciting discovery. 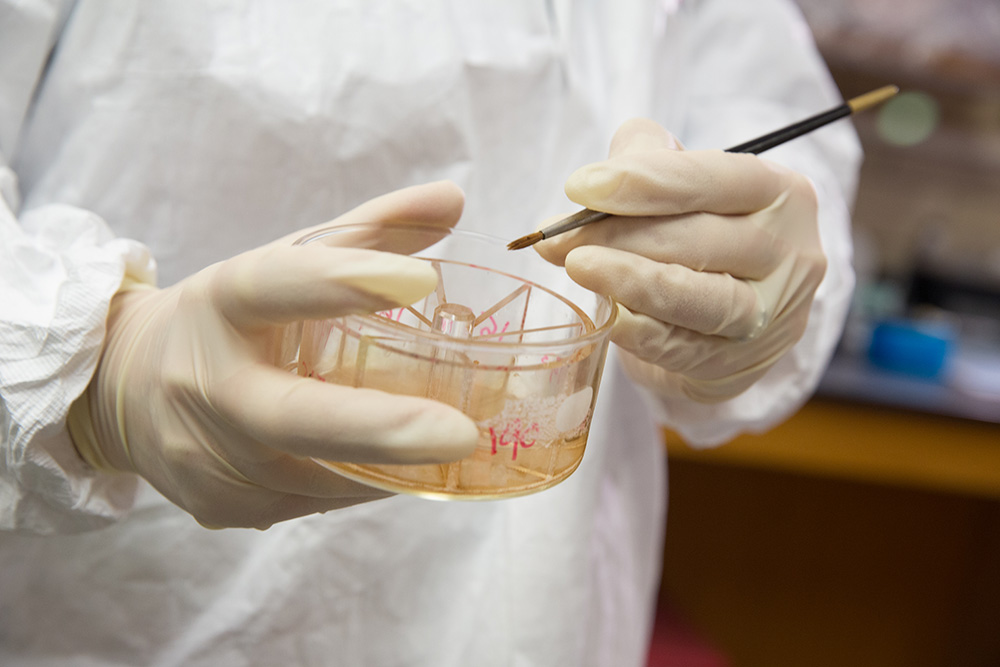 “Our new findings provide exciting new understanding into which neuronal circuits in the brain are required in order for diazepam—the active ingredient of Valium®—to be effective,” said Rudolph. “With approximately 10% of the population of Western countries using anti-anxiety medication to combat the sometimes debilitating symptoms of anxiety, it is critical for us to better understand how and why these medications work. Through the insights provided by work like ours, scientists will be able to develop more targeted and effective treatments. While therapeutically targeting specific cell types or circuits is currently not possible, many of our colleagues believe that as scientists make at least some inroads in our understanding of the enormous complexity of the brain, the development of circuit-based treatment strategies for psychiatric disorders is an attractive concept in the long run.”

According to the National Institutes of Health, anxiety disorders affect approximately 28% of adults in the United States and are characterized by excessive and persistent fear and/or anxiety, and related dysfunctional behaviors. While the terms are often used interchangeably, fear and anxiety are related but distinct emotional and behavioral states, and different anxiety disorders are characterized by different levels of disturbances in fear versus anxiety responses.

Fear is the emotional response to a specific stimulus (real or perceived) that poses an imminent threat, whereas anxiety is the anticipation of possible threats that are obscure and undefined. In terms of responses, fear leads to autonomic arousal (e.g., increased heart rate and blood pressure) necessary for fight or flight and escape behaviors, while anxiety is associated with muscle tension and increased vigilance, cautious or avoidant behaviors.

As the two states are caused by different situations and lead to different responses, some research in recent years has focused on whether different brain circuitry may mediate fear versus anxiety. Earlier research focusing on gross brain structures had in many cases found that fear and anxiety are mediated by the same brain structures. However, technical advances in recent years have allowed scientists to look closer into those gross brain structures, and led to the finding that many of those structures host several cell populations forming neuronal circuits that are called microcircuits with different characteristics, many subregions that communicate with each other and more distant brain regions, and perform different tasks.

“In our study we focused on a brain structure called the hippocampus, which had previously been implicated in the control of both fear and anxiety. In the brain, a delicate balance of excitation and inhibition of nerve cells is required for normal functioning. We genetically modified mice to delete a specific receptor that is part of the inhibitory system, which is the target of many clinically used anxiety-reducing drugs, within the hippocampus,” explained Engin. “In contrast to previous studies that looked at the hippocampus as a unitary structure, we focused on the three subregions within the hippocampus (CA1, CA3, and the dentate gyrus) and generated three different mouse models each of which lacked this receptor within only the principal cell type in one specific subregion.”

Rudolph, who was part of a groundbreaking study in 2000 that identified these specific inhibitory receptors in the brain called α2-GABAA receptor (GABA, or γ-aminobutyric acid being the major inhibitory neurotransmitter in the brain) as being essential for anxiety reduction and provided a “blueprint” for the development of anti-anxiety medication that is effective, but does not cause drowsiness—a common side effect of drugs like Valium®—knew there was more information needed in order to fully understand how Valium® and other anti-anxiety medications worked.

“As interesting as our finding in 2000 was, it only answered the question of what drug target (receptor) in the brain was needed to ensure benzodiazepines like diazepam would work in reducing anxiety,” said Rudolph. “We had no idea where in the brain these particular receptors (α2-GABAA receptor) were that are required for diazepam to reduce anxiety. We also had no idea whether diazepam would reduce anxiety and fear via α2-GABAA receptors on the same cells or on different cells and neuronal circuits. That is where our current study comes in and sheds light.”

According to Rudolph and Engin, they were able to disrupt the microcircuitry within the hippocampus at very specific points by taking out α2-GABAA receptors and were able to compare the behavioral and physiological responses of each group of mice to the other genetically-modified groups, as well as to control mice with no genetic modification.

“Surprisingly, we found that the control of anxiety and fear is completely non-overlapping within the hippocampus: When we gave the mice diazepam, i.e., a drug with anxiety- and fear-reducing effects, we found that the mice that had deleted the α2-GABAA receptors in hippocampal subregions CA3 and dentate gyrus were still showing anxiety (i.e., the drug could no longer reduce anxiety without acting on the receptors in those regions), but the drug still reduced fear in those mice,” she said. “On the contrary, when we deleted the α2-GABAA receptors in the CA1 subregion, the drug still reduced anxiety but it was no longer effective in reducing fear.”

The findings suggest, said Engin, that two different microcircuits within the hippocampus need to be targeted to reduce anxiety versus fear.

“It is possible that these two microcircuits are differentially affected in different anxiety disorders, depending on whether the disorder is characterized more dominantly by disruptions in fear reactions (e.g., phobias) or in anxiety (e.g., generalized anxiety disorder),” said Engin. “Research focusing on the neurocircuitry underlying specific behaviors has the potential to effectively map these neurocircuitry-specific disruptions, and to pave the way for more targeted and effective circuit-based therapies of psychiatric disorders in the future.”

In addition to researchers from McLean Hospital, scientists from Yale University, the University of Tennessee Health Science Center in Memphis, the Russian Academy of Sciences in St. Petersburg and the University of Zurich contributed to this study.

In the Media: Why I Wish My Patients Were More Anxious
More News