A Case of Pulmonary Embolism

My name is Katherine Athens and I am a nurse in the electroconvulsive therapy (ECT) clinic. It was a busy Friday in the clinic in March, a year ago. We were preparing to treat over 50 patients that day. Our practice had been expanding over the years, and it was hardly unusual to treat 50-plus patients a day—but it was busy nonetheless. (Since then, we have moved to a newly renovated and expanded space within the hospital.) I had recently assumed the role of preceptor for a nurse who had just joined our ECT team. I had been an RN in the ECT clinic just shy of two years at the time.

I was preparing to care for my first patient of the day, “Bob,” with the new RN shadowing me. He was a single 62-year-old male, in his second week of ECT treatment. A tall, big man, with large hands and salt and pepper hair, he was profoundly depressed and had very little energy. He had missed a lot of work of late, and his inactivity had resulted in a weight gain of 25 pounds over the past few months. He had a history of hypertension and multiple orthopedic surgeries (hip and knee replacements).

This would be Bob’s sixth ECT treatment, the third one that week. Bob was in the acute phase of ECT treatments. Typically, patients have three ECT treatments a week for three to four weeks in the acute phase. Thanks to the treatments, Bob was finally starting to feel better: he said his mood had improved 50% since starting ECT. The best part of my job is when patients finally feel some relief from their depression. It’s a great feeling and I am so happy for the patient when it happens. I find that it’s easy to be hopeful that a patient will get better because the majority of patients do respond, and we experience patients getting better all the time. But not everyone does respond, so each treatment brings with it a little bit of anxiety that this person may be “the one” whose depression doesn’t lift.

Because I had cared for Bob with the new RN just two days prior, his case was clear in my mind. That day, his recovery from anesthesia was memorable because it was somewhat complicated. He had experienced rapid oxygen desaturation, meaning the levels of oxygen circulating in his blood and tissues had plummeted. He quickly became cyanotic—blue—despite being hyperventilated prior to transport into the recovery room. It’s very scary when patients’ blood oxygen levels get low and you witness them turning blue. A value of less than 88% can result in the death of cells and other problems.

Bob had a difficult airway, which had required me to do an extended jaw thrust maneuver in order to keep his airway patent—open and clear. It is not unusual to perform this maneuver initially, until the short-acting anesthetics have worn off and patients are breathing and exchanging air on their own. But because Bob was a heavy set male with a large abdominal area and a lot of soft tissue surrounding his throat, he was more susceptible to airway obstruction, requiring extended airway support.

In visually observing Bob prior to the day’s treatment, I noted that his skin color was pale; he just did not look healthy. I asked him how he felt physically. He said he was tired and had low energy and had been hypoactive for the past few months. He denied being short of breath or having chest pains and said that he could walk up a flight of stairs without dyspnea—shortness of breath. His blood pressure was elevated prior to the treatment. He had taken his amlodipine, a blood pressure lowering medicine, two hours prior to treatment as instructed. His oxygen level was an acceptable 94-95% on room air. His EKG showed normal sinus rhythm.

I consulted the treatment team to review the assessment and the events of the previous treatment’s recovery. After careful review, the consensus was that we should proceed with treatment. It was decided that we would place an oral airway post-treatment. If his blood pressure remained elevated, we could give him an additional beta blocker in his IV. I would instruct him to see his primary care physician about his elevated blood pressure prior to his next treatment. We were anticipating another busy recovery—meaning lots of monitoring and various efforts to keep his airway open. And we were right.

Bob’s ECT treatment was uncomplicated. But once in the recovery room, he deteriorated rapidly, as he had during his last treatment. Despite clearly exchanging air with a patent oral airway in place, he began desaturating again. Quickly, his oxygen level dropped to the low 60s (percent), requiring manual re-oxygenation via an ambu bag by the attending anesthesiologist.

There are few things scarier than when a patient’s oxygen level plummets. Low oxygen levels can trigger an arrhythmia, which can snowball and before you know it, you have a huge emergency. The anesthesiologist mentioned that in the operating room, they often see rapidly desaturating oxygen levels in patients who have a pulmonary embolism. His statement was the catalyst that made me consider the likelihood that this was the disease process we were observing. A few minutes later, Bob remained hypertensive (usually by this time BP begins to approach baseline) and began having a ventricular dysrhythmia called trigeminy. This dysrhythmia is not rare to see here, but it is concerning when a patient goes into this rhythm for the first time without a history. I notified anesthesia and he was given IV labetalol. He resumed normal sinus rhythm and his blood pressure decreased.

Thirty minutes after his treatment, we still were not able to wean him off the O2. His oxygen level was 88% on room air and only 94% on 10 liters of O2. Usually, by this time, patients are able to maintain normal parameters on room air. I went into troubleshooting mode: repositioning the head of the bed, having him breathe deeply and cough, and double-checking the monitor to make sure it wasn’t malfunctioning. He was mildly tachypneic—breathing fast—with 24 respirations a minute, but was not diaphoretic or using accessory muscles for breathing. Again, he denied feeling short of breath and had no chest pain or dizziness. He wasn’t particularly anxious either. By 45 minutes post-treatment, his O2 was 91% on room air—still too low. I consulted with the treatment team, who recommended I get Bob ambulating and have his vitals rechecked in the recovery lounge. I communicated the events of the day’s treatment to the mental health specialist who would now take over in the recovery lounge, emphasizing the need to monitor his O2 (at the time we monitored only blood pressure and temperature in the recovery lounge, but that has changed), which she did. At one point, it dipped dangerously low again.

The MHS came to me privately when Bob was ready to be signed out and told me that his brother told her that Bob had not been feeling right at home and felt sick after going up some stairs. I took Bob into a private exam room and asked him if this was true and he admitted it was. I let him know that I was not upset at him, but concerned something was wrong and I genuinely cared for his wellbeing. I assured him that we would find out why he was feeling this way and I would have our internal medicine physician see him before he left. When I asked him why he hadn’t told me pre-treatment that he had been feeling unwell, he said he was beginning to feel less depressed and was afraid we would turn him away. It made me sad to think that the treatment was so important to him that he would lie—and potentially risk his life—to ensure he could access it.

I informed the treatment team of this new information and the discharging psychiatrist came in to see him again. The psychiatrist was able to contact Bob’s primary care physician, while I worked on getting internal medicine to see him. Bob’s PCP asked us to send him to Newton-Wellesley Hospital to be evaluated. Our internal medicine physician saw Bob shortly after. Because he was not in acute distress, he agreed that it was OK for Bob’s brother to take him to the hospital.

After Bob left McLean with his brother, the nurses and the MHS had a quick debriefing. The MHS became a little tearful as we all recounted what had happened, which in turn made me emotional. I think contributing to the intensity of the case was the fact that I felt responsible for the nurse I was training and hoped I had been a good role model. One of the strengths of the ECT service is how well we function as a team and I think that teamwork had helped avert a potential tragedy.

The following Monday we found out that Bob was admitted to Newton-Wellesley Hospital over the weekend and was found to have multiple pulmonary emboli. He was successfully treated with Coumadin and Lovenox without any adverse sequelae, and was discharged a few days later on Coumadin. He ended up continuing his ECT treatments at Newton-Wellesley.

Our ECT practice is expanding and we are treating more patients than ever before. Compared to the general population, our patients are at an increased risk of developing a PE, and many travel long distances to McLean for ECT, putting them at even greater risk because of the time they spend sitting in a car. So it makes sense that I am going to encounter more cases of pulmonary embolism. Fortunately, this case had a positive outcome from a medical point of view. Having had this experience, I feel I am better able to identify patients at risk of and suspected of having a PE, and I am more confident in my ability to educate my patients of the risk factors and warning signs. 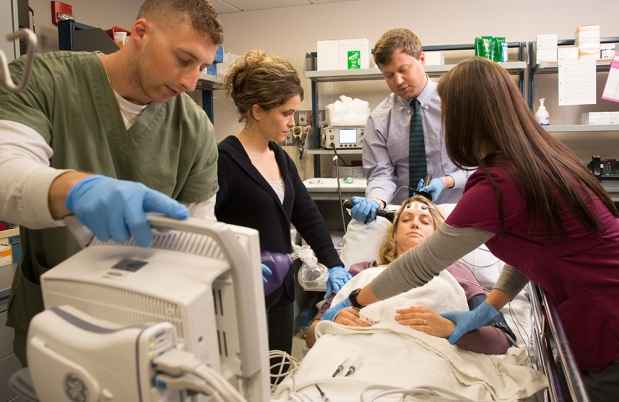