This edition of Discovery demonstrates some of the depth and breadth of research at McLean Hospital. With hundreds of hardworking researchers who hail from all parts of the world, our robust research program has all the tools to bring research from the bench to the bedside.

There is much more transformative research that we couldn’t include in this issue, including the ongoing work in the Center for Depression, Anxiety and Stress Research to help understand the neural circuit mechanisms of mood disorders and investigations at the McLean Imaging Center focused on human brain activity and connectivity underlying many psychiatric disorders.

Our dozens of scientists in the Mailman Research Center continue to make groundbreaking basic science discoveries that will one day impact new treatments for neuropsychiatric disorders ranging from neurodegeneration to stress-related disorders and addiction. Finally, throughout the hospital, our clinical research programs are embedded in clinical care, helping us to better understand best practices in treatment, suicide prevention, and digital phenotyping approaches to the behaviors and physiological processes that underlie mental illness. Thank you to all the donors who help fund this critically important research. 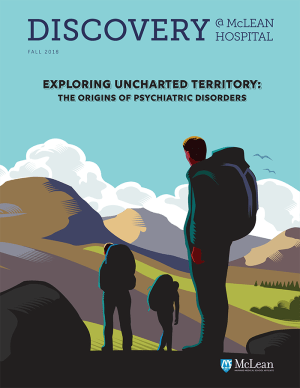 Blood Vessel Development’s Role in Psychiatric Disorders
For decades, scientists have known that gamma-aminobutyric acid (GABA) is a key factor in the development of neuropsychiatric disorders. But recent discoveries in the Angiogenesis and Brain Development Laboratory of Anju Vasudevan, PhD, have literally opened a new pathway.

Ross J. Baldessarini, MD: Celebrating a Pioneer
Ross J. Baldessarini, MD, originally thought he wanted to be an industrial organic chemist, not a doctor. The prospect of medical school didn’t thrill the Williams College chemistry major. He found it to be more like a trade school than an academic endeavor, not to mention it being “cutthroat and nasty.” But after a company he worked for one summer laid off 80% of its scientists following a corporate acquisition, he decided to rethink his future.

Brain Wiring Helps Illuminate Range of Uses for Non-Drug Therapies
Imagine if depression or obsessive compulsive disorder (OCD) could be treated with non-drug therapies, such as those currently being used to tackle Parkinson’s disease and other movement disorders. Suzanne Haber, PhD, is working toward that goal in her labs at McLean Hospital and the University of Rochester Medical Center.

New Smartphone App Helps During Mental Health Treatment Transition
The transition out of an inpatient psychiatric setting is never easy—for the patient or the clinician. And the challenge escalates after the day program ends and the patient returns home. Now, clinicians at McLean Hospital’s Behavioral Health Partial Hospital Program, a day program that integrates psychotherapy and pharmacotherapy (medications), believe they have a way to improve on that transition. A smartphone app.