In its 2013-2014 report of the nation’s best hospitals, U.S. News & World Report affirmed what patients and families have been telling us for years—that McLean Hospital is the best in psychiatry. To be rated number one in the field amongst all hospitals and medical centers in the United States is truly an honor.

We owe much of our success to McLean’s friends and supporters. Their belief in our mission encourages and inspires us to continually strive for excellence. Thank you.

The stories in this issue of Horizons illustrate just a few of the qualities that set McLean apart—our clinical expertise, our scientific prowess, and our commitment to patients, families, and the community. 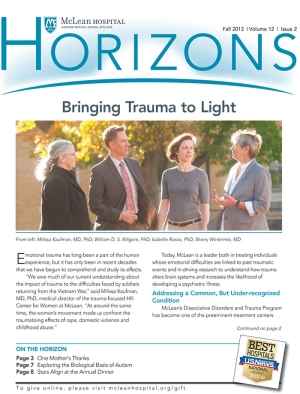 Bringing Trauma to Light
Emotional trauma has long been a part of the human experience, but it has only been in recent decades that we have begun to comprehend and study its effects. “We owe much of our current understanding about the impact of trauma to the difficulties faced by soldiers returning from the Vietnam War,” said Milissa Kaufman, MD, PhD, medical director of the trauma-focused Hill Center for Women at McLean. “At around the same time, the women’s movement made us confront the traumatizing effects of rape, domestic violence, and childhood abuse.”

One Mother’s Thanks
Danny Denner’s legacy of love and laughter lives on—and so will his mother’s act of generosity. By making provisions for McLean Hospital in her will, Fran Denner has honored her son and the institution that improved his life. Danny suffered from a complex set of psychiatric issues, and like many families, his parents struggled to find help for him. When things got really bad, his psychiatrist in their home state of Florida advised Fran and her late husband, Elliott, to bring Danny to McLean as soon as possible. Two days later, the family was on a plane to Boston.

Exploring the Biological Basis of Autism
One way to begin to understand the causes and effects of psychiatric illnesses is to examine the brain on the cellular level. More specifically, scientists look at how cells function on an individual level and how they interact with other cells in the brain. The Integrative Neurobiology Laboratory at McLean is dedicated exclusively to this approach.