Our fall edition of Horizons focuses on our Center of Excellence in Basic Neuroscience. Research is a crucial component of our mission and a fundamental aspect of what makes McLean so special. In this issue, you’ll read about donors who have chosen to support basic neuroscience and hear from the center’s chief, Bill Carlezon, PhD. We also share highlights from our June annual dinner, when we awarded the 2016 McLean Award to iconic singer-songwriter Judy Collins.

Many of you know that, after 17 years of exemplary service to McLean, Cathie Cook retired this June from her role as senior vice president and chief development officer. Cathie’s legacy is one of deep personal commitment, compassion, and hard work. We are enormously grateful for her leadership. Lori Etringer, MBA, will now serve as McLean’s vice president and chief development officer. “I am honored to have been given the opportunity to take the helm of McLean’s development office,” says Etringer. “It is because of Cathie’s mentorship and McLean’s strong community that I eagerly embrace the work ahead. I look forward to continuing to build support for McLean’s mission with the help of our donors and friends.” 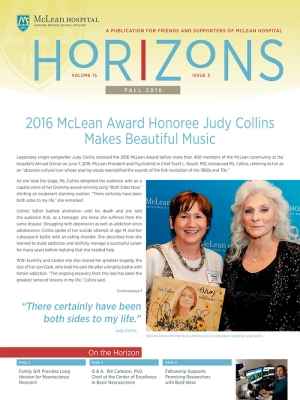 2016 McLean Award Honoree Judy Collins Makes Beautiful Music
Legendary singer-songwriter Judy Collins received the 2016 McLean Award before more than 400 members of the McLean community at the hospital’s Annual Dinner on June 7, 2016. McLean President and Psychiatrist in Chief Scott L. Rauch, MD, introduced Ms. Collins, referring to her as an “absolute cultural icon whose soaring vocals exemplified the sounds of the folk revolution of the 1960s and 70s.”

Graham Family Gift Provides Long Horizon for Neuroscience Research
“In my 20s, I was treated for alcoholism and depression at McLean,” says Stephen Graham, a professor of Victorian Studies at Bard College and member of the McLean National Council. “The staff there saved my life, and for that I have a deep debt of gratitude.” Several family members also have been patients at McLean, he adds. “The Graham family is well disposed toward McLean. It’s a great hospital.”

Q & A: Bill Carlezon, PhD, Chief, Center of Excellence in Basic Neuroscience at McLean
Bill Carlezon, PhD, leads McLean’s Center of Excellence in Basic Neuroscience, where researchers are working to understand the role brain function plays in psychiatric illnesses. We spoke with him to get an update on the center, which includes approximately 20 labs funded by more than $18 million in federal and private grants.

Rappaport Fellowship Supports Promising Researchers with Bold Ideas
Neuroscientist Sabina Berretta, MD, received $35,000 as one of the earliest recipients of a research fellowship from the Rappaport Foundation. The funding supported her research into structural changes that occur in two brain regions of people with schizophrenia. That modest grant laid the foundation for the next 15 years of her research and provided Dr. Berretta with promising preliminary data that opened numerous doors for her.