This edition of Horizons highlights our June annual dinner when we honored NFL wide receiver Brandon Marshall with the 2018 McLean Award. Michi Marshall, Brandon’s wife and partner in advocacy, accepted the award on his behalf and spoke eloquently about their work together. It was an uplifting night of celebration during which we also recognized other members of the McLean community who have made substantial and lasting contributions to the hospital.

A critical aspect of McLean’s mission is to educate the next generation of clinicians and researchers, so we are delighted to share a story about an internship established because of a deep connection to a beloved school and an inspirational professor. You will also read about a groundbreaking research program that extends all the way to Ohio and may have significant clinical impact on the way we treat childhood trauma.

Finally, with medical and recreational marijuana a hot topic in much of the country, we bring you a timely story about research into the effects of medical cannabis fueled by a significant new gift. 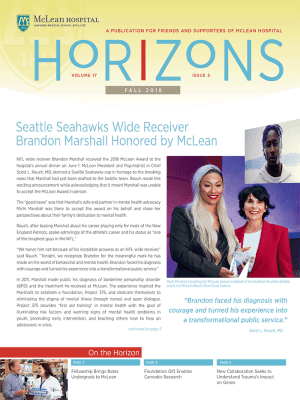 Seattle Seahawks Wide Receiver Brandon Marshall Honored by McLean
NFL wide receiver Brandon Marshall received the 2018 McLean Award at the hospital’s annual dinner on June 1. McLean President and Psychiatrist in Chief Scott L. Rauch, MD, donned a Seattle Seahawks cap in homage to the breaking news that Marshall had just been drafted to the Seattle team. Rauch made this exciting announcement while acknowledging that it meant Marshall was unable to accept the McLean Award in person.

Kelsey Fellowship Brings Bates Undergrads to McLean Labs
Former Board Chair David Barlow has endowed a fellowship that forges a closer relationship between two institutions that are dear to his heart: McLean Hospital and his alma mater, Bates College. The John Kelsey Fellowship is named after the retired Bates professor who built the college’s neuroscience program and nurtured generations of neuroscientists, including Bill Carlezon, PhD, chief of McLean’s Jerry and Phyllis Rappaport Center of Excellence in Basic Neuroscience Research.

Foundation Gift Enables Cannabis Research
For a substance that has been used by humans for more than 5,000 years, there remains much to learn about marijuana’s effects on the brain. McLean neuroscientist and clinical researcher Staci Gruber, PhD, has spent more than two decades trying to advance knowledge in this domain.

New Board Chair Aims to Expand McLean’s Impact
Carol Vallone has spent her career launching, scaling, and selling global market-leading online learning companies. An 11-year veteran of the McLean Board of Trustees and its new chair as of March 2018, Vallone has stepped away from a high-powered business career to dedicate herself to McLean and its critical mental health care initiatives.

New Collaboration Seeks to Understand Trauma’s Impact on Genes
Why does one person who experienced severe childhood adversity become homeless or addicted, while another with a similar background builds a loving family life and a thriving career? Is the answer in our genes, or perhaps in how trauma affects our genes?