The Fall/Winter 2019 edition of Horizons brings you stories of celebration.

Our first story celebrates the importance of truth and openness. At McLean’s Annual Dinner in September, our 2019 McLean Award honoree Selena Gomez captivated guests with her courage and honesty. It was a wonderful evening of celebration, heartfelt gratitude, and stirring aspirations for the future.

This year we also celebrated the major contributions of two important members of the McLean community—Dr. Joseph Gold and Edward P. Lawrence—with the establishment of the Edward Peabody Lawrence Endowed Chair in Psychiatry and the installation of Dr. Gold as its inaugural incumbent.

Our third story honors the struggles of a Holocaust survivor and celebrates his life through the promise of research. His family’s dogged efforts to ease the struggles of their beloved father uncovered an unexpected connection—one that has now led to some promising research in the realm of Alzheimer’s disease and related dementias.

And finally, our last story celebrates the extraordinary success of a project launched by philanthropy. The School Nurse Liaison Project is helping thousands of children in the community through the ubiquitous—and now better-informed—school nurse. 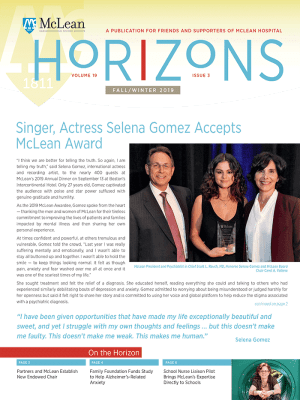 Singer, Actress Selena Gomez Accepts McLean Award
“I think we are better for telling the truth. So again, I am telling my truth,” said Selena Gomez, international actress and recording artist, to the nearly 400 guests at McLean’s 2019 Annual Dinner on September 13 at Boston’s Intercontinental Hotel. Only 27 years old, Gomez captivated the audience with poise and star power suffused with genuine gratitude and humility.

Family Foundation Funds Study to Help Alzheimer’s-Related Anxiety
Alexander Spier wanted to leave the world a better place than he found it. As a philanthropist, he gave generously, and despite his wealth, he lived simply. Now his family foundation is funding a first-of-its-kind study investigating the use of cannabis in quelling anxiety and agitation in patients with dementia.

School Nurse Liaison Pilot Brings McLean’s Expertise Directly to Schools
School nurses know better than anyone that a child who shows up in their office with chronic stomachaches may actually be struggling with something more serious—perhaps depression, maybe anxiety. Increasingly, schools are on the front lines of the surge in mental health conditions in children and adolescents, and since 2014, McLean has been helping school nurses deal with this increase.

For more than 35 years, the Phyllis and Jerome Lyle Rappaport Foundation has been actively promoting the growth of leadership and innovative thinking in the areas of mental health, neurologic diseases, public policy, and the arts. Through its Rappaport Fellowship at McLean, established in 2001, the foundation has provided young investigators the opportunity to work and learn side-by-side with world-class psychiatric researchers and neuroscientists at McLean.

On September 4, the foundation hosted Rappaport Connects Medical Research, an event celebrating the talented and dedicated researchers, doctors, and administrators who have brought so much promise and innovation to the world. Galen Missig, PhD, 2017-2018 Rappaport fellow, represented McLean in a “Science Slam” at the event, presenting his work in an accessible and engaging 10-minute talk.

The Rappaport Foundation has funded a total of 22 fellows at McLean. 2019-2020 fellows are Antonia Seligowski, PhD, and Matthew Sacchet, PhD.

If you are 70½ or older, you can reduce your 2019 taxable income and income tax, as well as make a generous gift, by making an IRA qualified charitable distribution (QCD) to McLean. Criteria include: