As one of the leading psychiatric institutions in the country, McLean has a responsibility to maximize its positive impact by disseminating its good works as far and wide as possible. You’ll see several examples of our deep commitment in this issue of Horizons. The first is McLean’s training program for mentalization-based treatment, which attracts clinicians from across the country and is helping to increase access to effective therapy for people with borderline personality disorder.

You’ll also learn about our College Mental Health Program, which has grown from a small, grassroots initiative working with a handful of colleges and universities and a diverse population of student patients into a robust program that is proactively touching the lives of thousands of youths each year.

In this issue, we’ll also explore the many possibilities of planned gifts, including the bequest of Janet Churchill, which will foster new discoveries while nurturing the next generation of brain researchers. 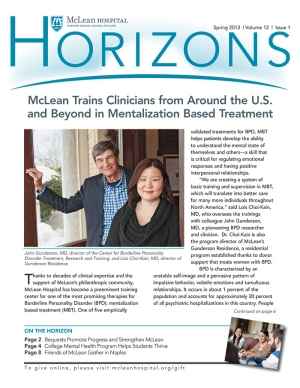 McLean Trains Clinicians From Around the U.S. and Beyond in Mentalization-Based Treatment
Thanks to decades of clinical expertise and the support of McLean’s philanthropic community, McLean Hospital has become a preeminent training center for one of the most promising therapies for borderline personality disorder (BPD): mentalization-based treatment (MBT). One of five empirically validated treatments for BPD, MBT helps patients develop the ability to understand the mental state of themselves and others—a skill that is critical for regulating emotional responses and having positive interpersonal relationships.

Bequests Promote Progress and Strengthen McLean
When Janet Churchill was a young girl, she visited her grandmother who was a patient at McLean. She recalls impressive buildings set atop a hill, majestic trees, and a sweeping landscape. A Massachusetts native who later settled in Delaware, Churchill retained over the years a sense of McLean’s excellence—from the care it provides to people like her grandmother to its cutting-edge brain research to its robust training environment for mental health professionals.

College Mental Health Program Helps Students Thrive
With three daughters in college and a fourth in high school, Bob and Carroll Pierce are keenly aware of how emotionally challenging adolescence and early adulthood can be. And because parents lose the legal right to their children’s health information when they turn 18, a service like McLean’s College Mental Health Program (CMHP) resonates deeply with them.