Devoted—that one word describes so many members of the McLean community.

Great work is happening everywhere you look at McLean—under microscopes, in conference rooms, in our schools, and in our satellite locations. No matter how diverse our backgrounds and back stories, we all share a steadfast commitment to confronting the challenges posed by psychiatric illness.

You will read about several devoted members of the McLean community in this issue of Horizons. They take the form of veteran leaders, rising stars, tireless athletes, and visionary philanthropists. They are diverse in discipline, but kindred in spirit. And they are spreading the message of hope to patients and families across the McLean community and beyond. 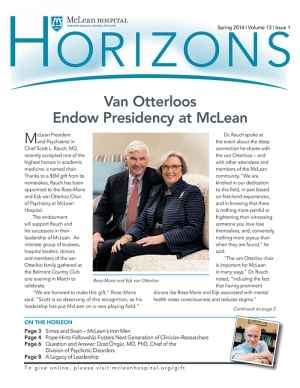 Van Otterloos Endow Presidency at McLean
McLean President and Psychiatrist in Chief Scott L. Rauch, MD, recently accepted one of the highest honors in academic medicine: an endowed chair. Thanks to a $5M gift from its namesakes, Dr. Rauch has been appointed to the Rose-Marie and Eijk van Otterloo Chair of Psychiatry at McLean Hospital.

Simas and Swan: McLean’s Iron Men
In August 2013, George Simas swam 2.4 miles, biked 112, and ran 26.2 to honor the memory of his long-time friend and mentor—McLean trustee Thomas J. Swan Jr. “Tom was one of a kind,” said Simas, president and chief operating officer of Emerson Swan, a company founded by Swan and his brother Joseph. “He made you feel as if his conversation with you was the most important one he ever had.”