Roughly 5.4 million adults in the U.S. are diagnoses with Alzheimer’s disease, and that number is likely to triple over the next 30 years as baby boomers age. Meanwhile, mood disorders such as depression are common in older adults, but can look different than in younger people. These are just a few reasons why the field of geriatric psychiatry is critical now and will grow in importance in the coming years.

This issue of Horizons focuses on our new Center of Excellence in Geriatric Psychiatry, which brings together the three pillars of McLean’s mission: clinical care, research, and education under the direction of Center Chief Brent P. Forester, MD, MSc. You’ll also read about the installation of a powerful new magnet at our McLean Imaging Center which is significantly expanding McLean’s capacity for highly sophisticated brain research. Finally, we’ll give you a glimpse into our new Spirituality and Mental Health Program that recognizes the vital role spirituality plays in the lives of many of our patients. 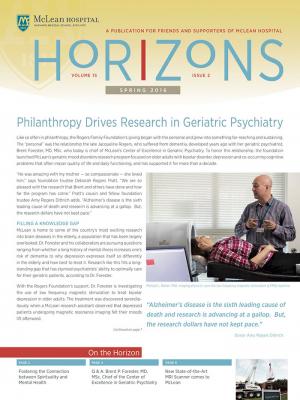 Philanthropy Drives Research in Geriatric Psychiatry
Like so often in philanthropy, the Rogers Family Foundation’s giving began with the personal and grew into something far-reaching and sustaining. The “personal” was the relationship the late Jacqueline Rogers, who struggled with dementia, developed years ago with her geriatric psychiatrist, Brent P. Forester, MD, MSc, who today is chief of McLean’s Center of Excellence in Geriatric Psychiatry.

Donors Foster Connection Between Spirituality and Mental Health
Dr. David H. Rosmarin’s mission is to treat the whole patient. According to a 2011 Gallup Poll, 93% of Americans believe in God or a higher power, and 50% indicate that religion is very important to them. Despite these statistics, few mental health clinicians receive training in assessing a patient’s spiritual beliefs, and many are therefore uncomfortable initiating this discussion.

Technology Improves Quality of Life for Older Adults
Technology may revolutionize the lives of older adults with psychiatric disorders, thanks to creative research ideas posed by Ipsit Vahia, MD, McLean’s new medical director for the Geriatric Psychiatry Outpatient Services. Dr. Vahia is working closely with Dr. Brent Forester on a number of novel studies that explore the use of technology and smart devices to improve assessment of psychiatric symptoms, optimize medication management, and increase opportunities for healthy aging in place.

Supporting the Future
Betsy and Ralph Gordon have a list of reasons why they’ve included McLean in their estate plans. Throughout their marriage, they have watched elderly relatives and dear friends cope with Alzheimer’s, and they are optimistic about the breakthroughs being made in McLean’s geriatric research programs.

Honoring the Memory of a Special Young Man

Technology Promises to Revolutionize Diagnosis, Treatment, and Outreach at McLean

END_OF_DOCUMENT_TOKEN_TO_BE_REPLACED

Mental Wellness for Kids and Teens

Impact of Racial Discrimination and Trauma on Racial Health Disparities in African American...

The Mental Perks of Setting Goals and Maintaining Motivation