2017 has already been marked by extraordinary highs and lows within the McLean community. We are both humbled and thrilled to announce the completion of The Campaign for McLean Hospital, which topped $107M! Thanks to the remarkable generosity of our donors, we not only met, but exceeded our goal and were able to close the books on this effort nearly a year ahead of schedule.

Juxtaposed against the success of this initiative, however, was the heartbreaking loss on January 10 of Cathie Cook, our much-beloved former senior vice president and chief development officer. Many of you knew Cathie and experienced her passion for McLean. By all accounts, much of the success of this campaign rests squarely on her shoulders. Cathie leaves an incomparable legacy and enduring impact on McLean.

In this edition of Horizons, we pay tribute to Cathie as we celebrate the fruits of her leadership. We also provide an update on the outstanding efforts happening around McLean’s work in women’s mental health—a cause particularly dear to Cathie’s heart. In addition, you’ll read two stories about anonymous donors whose generosity is changing the landscape of borderline personality disorder treatment, training, and family support. 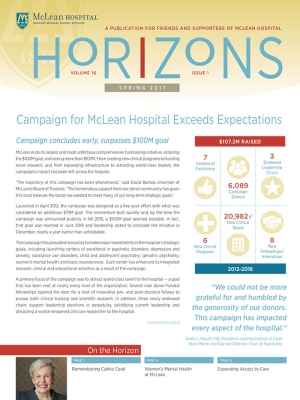 Campaign for McLean Hospital Exceeds Expectations
McLean concluded its largest and most comprehensive fundraising initiative on December 31, 2016, surpassing the $100M goal by $7M and ahead of schedule. From seeding new clinical programs to funding novel research, and from expanding infrastructure to attracting world-class leaders, the campaign’s impact is apparent across the hospital.

Remembering Cathie Cook
On January 10, 2017, Catharine “Cathie” Cook passed away after a courageous battle with ocular melanoma. For 17 years, Cathie led the McLean development office with passion, vision, and unyielding devotion to the hospital’s mission. She had an enormous impact on McLean and on the mental health field more broadly.

New Trustee Ron Jackson Couldn’t Say No to McLean
Children and their families is a theme that has run through Ron Jackson’s professional and philanthropic life. McLean’s newest trustee spent a good portion of his career turning around toy companies. And he has always had a soft spot for organizations that focus on supporting society’s youngest and most vulnerable.

Q & A with Shelly F. Greenfield, MD, MPH: Women’s Mental Health Takes on New Dimensions
McLean has long been at the forefront of recognizing the unique mental health needs of girls and women, with a track record of developing programs tailored to important gender differences in mental health. The Center of Excellence for Women’s Mental Health provides a unifying infrastructure through which to foster greater collaboration among the clinicians, researchers, and educators who share this focus.

Council Promotes Dialogue About Mental Illness
National Council members Carroll C.D. Pierce and Kristine M. Trustey didn’t know each other until they agreed to co-chair McLean’s new Women’s Mental Health Leadership Council. Established only a year ago, the council now boasts 36 members, all women committed to learning about mental health issues facing women and girls and providing philanthropic support for the pioneering work done in this field at McLean.

Grateful Family Helps McLean Expand Access to Care
Borderline personality disorder (BPD) is a complex mental illness characterized by emotional hypersensitivity and unstable behaviors that is often misdiagnosed. Some clinicians avoid patients with BPD, believing they are difficult to work with and have poor outcomes. And the most effective evidence-based treatments are highly specialized, time-consuming, and expensive—leaving them inaccessible to most patients.

A Family’s Suggestion Inspires Educational Series
The quest for information, resources, and support is a nearly universal need for families dealing with mental illness. One family, whose relative was treated for borderline personality disorder at McLean, wanted to address that need and the family suggested that McLean leverage its extraordinary expertise to help others.

Good Care Prompts Planned Gift
Brian Hyde and his partner of 40 years, Joe Fiorello, would like their gratitude to McLean to be evident long after they are gone. That’s why they decided that making a planned gift was the best way to ensure that their contribution will create impact for the long term.