Our spring edition of Horizons highlights philanthropy’s unique ability to enable one person’s charitable gesture to directly impact other individuals not known to them. Among these stories you’ll discover:

The Power of Generosity

Navigator Helps Patients and Families Find Meaning and Purpose
Brian Scott sees his own depression and anxiety as a gift. And that’s a lesson he tries to impart to the patients with whom he works. As McLean’s first formal patient/family navigator, Scott helps patients and families negotiate the challenges to living meaningful, fulfilling lives after hospital care. That might mean brainstorming career or volunteer opportunities with a patient, helping a family reconnect with an estranged child, assisting with insurance forms, or running a recovery and resiliency group at a program. The role is funded as a three-year pilot by The Manton Foundation. 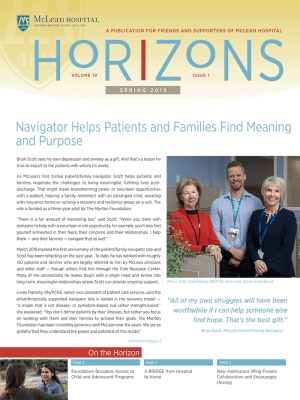 Tepper Foundation Broadens Access to Child and Adolescent Programs
Shyanne had more or less stopped talking—a disorder called selective mutism. She was depressed and anxious, had stopped going to school and couldn’t stand to be touched. Her grandmother was doing her best to home school her but admits the 12-year-old was learning very little.

A Bridge From Hospital to Home
The first 30 days following a period of psychiatric treatment can be treacherous. Patients have left the supportive, highly structured environment of the hospital, with its singular focus on recovery, to return to the same old stressors. They also have to navigate new stressors, such as explaining their absences to colleagues. And transitioning to a new outpatient therapist can be fraught. Not surprisingly, that first month is the time when people are at the greatest risk for relapse, re-hospitalization, and suicide.

New Admissions Wing Fosters Collaboration and Encourages Healing
Patients with mental health emergencies often languish in emergency departments for hours and sometimes days. A scarcity of inpatient psychiatric beds across the country is a significant problem. With the opening of McLean’s new three-floor wing off the Admissions Building in 2016, this insufficient capacity—locally, at least—has been somewhat alleviated.