This first edition of Horizons in 2022 pays tribute to the impact McLean has beyond our core campus in Belmont. Despite the challenges of the past two years, McLean continues to grow, expand access to care, and share our expertise broadly.

You’ll read about our new 68-bed inpatient facility in Middleborough, Massachusetts, which opened last fall to help meet the surge in mental health needs. Twenty two of those beds are designated for adolescents—a population whose mental health has been particularly impacted by the pandemic.

Young people will also benefit from actor, singer, and mental health advocate Selena Gomez, who provided a grant to help McLean launch a series of free educational webinars aimed at youth who haven’t historically had access to mental health education.

This issue also brings an update on McLean’s Program of Assertive Community Treatment (PACT), an initiative that meets individuals in the community and strives to support their recovery and independence. New program leadership is working toward ensuring that underserved communities can benefit from our PACT team, too.

Finally, we’re delighted that one of our favorite events is back and better than ever. The 2022 Ride for Mental Health is scheduled for June 25 and 26 in New Paltz, New York. Founder Mac Dorris hopes to top $1 million in support for McLean through this year’s event. We hope you will consider joining us. 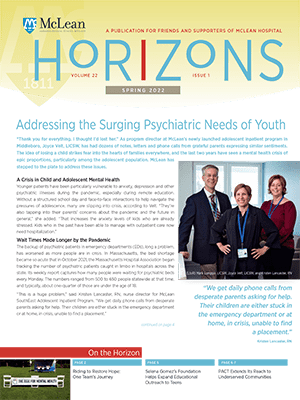 Addressing the Surging Psychiatric Needs of Youth
“Thank you for everything. I thought I’d lost her.” As program director at McLean’s newly launched adolescent inpatient program in Middleborough, Joyce Velt, LICSW, has had dozens of notes, letters, and phone calls from grateful parents expressing similar sentiments. The idea of losing a child strikes fear into the hearts of families everywhere, and the last two years have seen a mental health crisis of epic proportions, particularly among the adolescent population. McLean has stepped to the plate to address these issues.

Riding To Restore Hope
In 2019, a group of six friends from the Boston area—all women, all mothers—signed up for the third annual Ride for Mental Health. That first year, it was all about a ‘women’s weekend’ and getting away from the responsibilities of daily life. They decided to tackle the 25-mile route—some with more trepidation than others.

Selena Gomez’s Foundation Helps Expand Educational Outreach to Teens
Singer, actress, producer, and founder of Rare Beauty Selena Gomez uses her celebrity status and expansive platform to bring awareness to mental health. Now, her Rare Impact Fund has donated $100,000 to McLean to fund a series of free educational webinars targeting young people, as well as the people who care about them—parents, teachers, coaches, and others. The Rare Impact Fund is an outgrowth of Rare Beauty, Gomez’s makeup line that channels 1% of its profits to the fund.

PACT Extends Its Reach To Underserved Communities
McLean’s Program of Assertive Community Treatment (PACT) strives to provide customized, person-centered care in the community. Serving people that primarily have chronic mental illnesses like schizophrenia and bipolar disorder, the program’s goal is to help people live fulfilling, independent lives, keeping them at home and out of the hospital. “We walk alongside them, recognizing the potential and power within them,” said PACT Medical Director Rahel Bosson, MD. “We help stabilize them clinically so they can transform their lives in ways that are meaningful to them.”

David is a donor, a former patient at McLean’s OCD Institute, and a member of McLean’s Patient and Family Advisory Council (PFAC). In his role at PFAC, David is dedicated to reducing the stigma associated with a psychiatric diagnosis. He has graciously shared an aspect of his own story:

“Throughout my career, I kept it secret that I had a fear of the number ‘13’ and avoided it at all costs. Eventually, my obsessive ruminating began to affect my ability to work. I was ashamed, and the self-inflicted stigma was paralyzing. I was scared to lose my job and my mind.

In December 2018, I flew from Florida to Belmont, Massachusetts, to be a patient at the Obsessive Compulsive Disorder Institute (OCDI) at McLean Hospital. During the first few weeks of treatment, I noticed patients were taking ‘timed’ showers and held self-compassion books close to their hearts.

Initially I was disdainful, and I could not believe someone needed to be timed while taking a shower! I unfairly stigmatized these other patients as ‘weak.’ Then, I was being timed in the shower! I realized how hypocritically judgmental I had been.

Over time, and through my treatment at the OCDI, I realized that I had strayed from my values of helping others, spending time with family, and even reading that self-compassion book.

I was healthier and a much kinder person by the time I was discharged.

As I am writing this, I hoped to define stigma, reflecting on my own experiences. Stigma is what keeps us from living value-based lives, the lives we want to live.”