Addiction is one of our country’s greatest public health issues, affecting an estimated 28 million adults and young people each year. McLean’s Division of Alcohol, Drugs, and Addiction offers evidence-based treatments for those struggling with the abuse of alcohol, prescription medications, or illegal drugs through a comprehensive array of programs. And as our understanding of addiction improves—thanks to integrated research, training, and clinical efforts—that treatment gets better and better.

In this issue, you’ll hear from the division’s chief, Roger D. Weiss, MD, and also learn about our new Co-Occurring Disorders Institute, which is training clinicians throughout McLean to treat their patients’ addictions and psychiatric illnesses in a truly integrated way.

Finally, we share highlights of the second annual meeting of the McLean Board of Visitors—a group of friends, supporters and advocates who convened this spring to learn about McLean’s work and meet others with an interest in mental health. 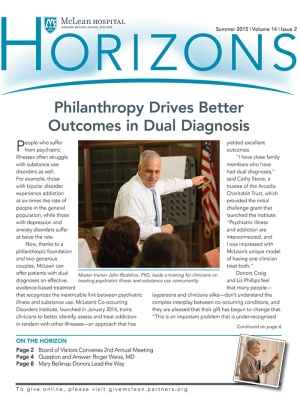 Philanthropy Drives Better Outcomes in Dual Diagnosis
People who struggle with psychiatric illnesses often struggle with substance use disorders as well. For example, those with bipolar disorder experience addiction at six times the rate of people in the general population, while those with depression and anxiety disorders struggle at twice the rate. Now, thanks to a philanthropic foundation and two generous couples, McLean can offer patients with dual diagnoses an effective, evidence-based treatment that recognizes the inextricable link between psychiatric illness and substance use.

Board of Visitors Convenes 2nd Annual Meeting
More than 70 members of the Board of Visitors gathered at McLean on May 7, 2015, for the group’s second annual event. The Board of Visitors, which has grown to include approximately 170 members from 14 states, Canada, and the Dominican Republic, was established to help McLean forge deeper connections with individuals who have an interest in mental health and McLean. Members are asked to learn about McLean’s programs and services and current issues in psychiatry so they can better understand, communicate, and advocate for mental health in their communities.

Question and Answer: Roger Weiss, MD, Chief of the Division of Alcohol, Drugs, and Addiction
The abuse of alcohol, prescription medications, and illegal drugs is one of the most serious health problems in the United States. Substance use disorders have devastating effects on families and communities and their cost to society is immeasurable.