We open our summer 2017 edition of Horizons with highlights from our June annual dinner when we presented the 2017 McLean Award to ABC news anchor and investigative journalist Elizabeth Vargas. The event is a favorite within the McLean community, and it leaves us all feeling energized and inspired to redouble our efforts to support the mission of this hospital.

At McLean there is a long tradition of blazing trails toward new and better ways to serve those who turn to us in need. You will read about several pioneering initiatives in this issue: a new space—created with love in the memory of a lost son and brother—where newly diagnosed young people can create community and find support from their peers; a first-of-its-kind postgraduate fellowship in women’s mental health made possible by a family foundation; and the innovative new Institute for Technology in Psychiatry (ITP), with its focus on deploying technology to address real-world problems for both patients and providers while changing the field of behavioral and mental health for the better. 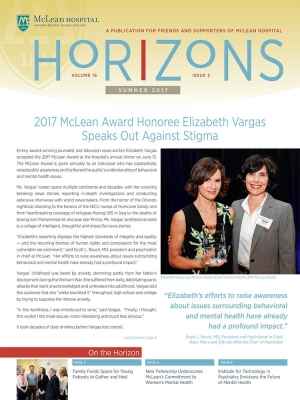 Family Funds Space for Young Patients to Gather and Heal
Andrew Smith was an avid sports fan. Always a contrarian, he rooted for the team his family wasn’t supporting. He had a quirky sense of humor, loved chatting on the phone, and taking long walks, often stopping for pizza. When he died in 2011 at age 30, after struggling for years with schizophrenia, his family wanted to honor Andrew’s efforts to find his way in the world.

New Fellowship Underscores McLean’s Commitment to Women’s Mental Health
When it comes to gender, psychiatric illnesses sometimes do discriminate. Depression, post-traumatic stress disorder, and eating and anxiety disorders are more common in women than in men. And while substance use disorders affect more males than females, women progress more quickly from use to dependence.

Institute for Technology in Psychiatry Envisions the Future of Mental Health
At a restaurant in San Diego, Ipsit Vahia, MD, had his “aha” moment. He and his wife were dining with friends and their four-year-old son, who was restless and disruptive. Vahia handed over his iPhone, and the boy was quietly absorbed until it was time to leave.

Parents’ Gratitude Inspires Annual Giving
Like others with a serious psychiatric disorder, Sam and Kathy Goldblatt’s son experienced a revolving door of hospitalizations that never successfully treated his illness nor involved him in the process. But then they found McLean.