We are thrilled to share news of our $100 million Campaign for McLean Hospital. The response so far has been extraordinary, and we appreciate each and every donor who has contributed. We are confident the McLean community will help us reach this historic goal.

This issue of Horizons also focuses on two common and debilitating illnesses: depression and anxiety. One in five Americans will struggle with depression at some point in life, and the numbers are even higher for anxiety. McLean’s new Division of Depression and Anxiety Disorders is taking the lead in this field, and you’ll hear how from the center’s chief, Kerry J. Ressler, MD, PhD. You’ll also read about our innovative research into the neurobiology of depression and anxiety disorders, including some of the wonderful donors behind this groundbreaking work.

Finally, we offer a glimpse into one of our clinical programs for children and adolescents—the McLean Anxiety Mastery Program, where small miracles are happening every day. 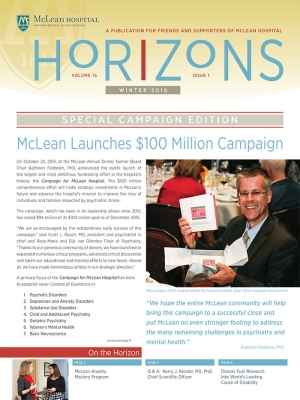 McLean Launches $100 Million Campaign
At McLean’s 2015 Annual Dinner in October, the Hospital publicly announced its $100 million Campaign for McLean Hospital. The largest and most ambitious in the Hospital’s history, this campaign is a comprehensive effort that will advance McLean’s mission to improve the lives of individuals and families affected by psychiatric illness.

McLean’s Anxiety Mastery Program Helps Kids and Families Get Back on Track
The children and adolescents who attend the McLean Anxiety Mastery Program (MAMP) often have lives that have gone painfully off-track: the high school senior whose perfectionism crowded out everything else in her life; the boy whose fear of germs rendered him unable to attend school for months; the teenager who was petrified of vomiting; and the 12-year-old girl with social anxiety who clung to her mother and wouldn’t talk above a whisper.

Questions and Answers: Kerry J. Ressler, MD, PhD, Chief Scientific Officer and Chief of the Division of Depression and Anxiety Disorders
Kerry J. Ressler, MD, PhD, arrived at McLean in August as chief scientific officer and the inaugural chief of McLean’s new Division of Depression and Anxiety Disorders. He also holds the James and Patricia Poitras Endowed Chair in Psychiatry, thanks to a generous gift from longtime donors Patricia and James Poitras.

Donors Fuel Research Into World’s Leading Cause of Disability
For much of the last century, depression has been viewed largely as a single disease; however, it is an extraordinarily heterogeneous condition. Consequently, predicting which healthy people will develop depression is challenging. Given that approximately half of patients do not respond to current options for care, finding the right treatment is equally difficult. Clearly, further study is needed.

Kennedy Receives 2015 McLean Award
Long-time politician and mental health advocate, Congressman Patrick J. Kennedy became the eighth recipient of the prestigious McLean Award on October 23, 2015. This annual award is presented to individuals who have furthered the public’s understanding of psychiatric illness and mental health. Mr. Kennedy has made this cause a lifelong mission.