We also introduce you to three new members of the McLean Board of Trustees. Each are leaders in their fields who will lend enormous expertise to McLean’s strategic growth and progress.

We share an innovative training program for young professionals working in borderline personality disorder and take a moment to applaud the substantial legacy of one of the world’s most significant contributors to this field.

Finally, recognizing that the opiate crisis continues to impact communities throughout the nation, we highlight a local, philanthropically supported program aimed at helping patients use art in their recovery. 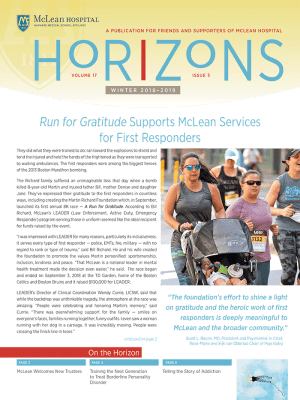 Run for Gratitude Supports McLean Services for First Responders
They did what they were trained to do: ran toward the explosions to shield and tend the injured and held the hands of the frightened as they were transported to waiting ambulances. The first responders were among the biggest heroes of the 2013 Boston Marathon bombing.

Training the Next Generation to Treat Borderline Personality Disorder
Alexandra Yogman, LICSW, recalls the first time she talked alone with a patient with borderline personality disorder. It was 2015, and as part of her social work master’s degree program, she was interning on McLean’s Short Term Unit. She had spent several months shadowing experienced clinicians, and her supervisor believed she was ready to sit down and converse alone with this patient.

John Gunderson: Borderline Personality Disorder Trailblazer
As a young psychiatrist, John G. Gunderson, MD, was fascinated by certain patients that he, and even his more experienced colleagues, struggled to diagnose and treat. At the time, these patients were called “borderline schizophrenic” or “borderline neurotic.” Dr. Gunderson went on to co-author a 1975 article that, for the first time, gave a name and diagnosis to this collection of characteristics: borderline personality disorder.

Telling the Story of Addiction
Ava Grieco’s canvas shows her floating through a blue sky, arms wide and stippled with needle marks. A chain anchors her to a hypodermic needle. Her polka-dotted pants and black top have tremendous meaning.

Philanthropy Provides Crucial Support for Addiction Treatment
When Maria Curtis’s son was released from a McLean treatment program, she was so impressed by the follow-up he received that she and her husband John made a gift to the hospital, directing it to help patients during their early recovery. Their generosity was enormously appreciated, says Roger Weiss, MD, chief of McLean’s Division of Alcohol, Drugs, and Addiction.