How Does Trauma Affect Women’s Brains?

Through clinical practice and neuroimaging studies, McLean Hospital’s Milissa Kaufman, MD, PhD, and Lauren A.M. Lebois, PhD, are revealing the clinical, cognitive, and neurobiological underpinnings of the effect of trauma on the brain, specifically in women, including long-misunderstood forms of post-traumatic stress disorder (PTSD)—PTSD dissociative subtype and dissociative identity disorder (DID). In so doing, they are not only helping to destigmatize the disorders, which often develop as a defense against early abuse and neglect, but are also identifying risk factors for them. They are also opening the door to more targeted treatments in the future.

“These women are often marginalized because of their diagnosis,” said Kaufman, who is director of McLean’s Dissociative Disorders and Trauma Research Program and medical director of the hospital’s Hill Center for Women. “By understanding the neurobiology of dissociation we can help destigmatize people with dissociative disorders and PTSD and also destigmatize child abuse and women who have been abused.”

To those ends, she and Lebois, director of neuroimaging in the Dissociative Disorders and Trauma Research Program and a fellow in the Neurobiology of Fear Laboratory, have embarked on an ambitious research study funded by a two-year Exploratory/Developmental Research Grant Award from the National Institutes of Health. In the study, they will expand on preliminary research exploring the relationship between the phenomenology (the subjective experience) of women with these disorders and the neural mechanisms that represent three forms of PTSD: classic PTSD, the dissociative subtype, and DID. 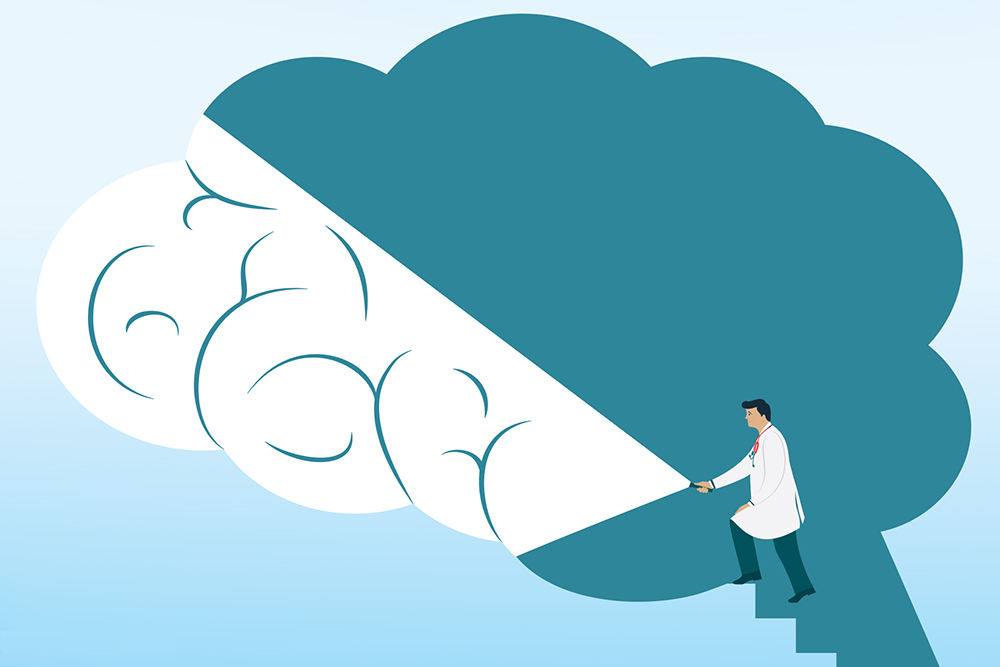 “There is no better way to understand just what trauma means to a person than to listen deeply to his or her own words,” said Kaufman.

For the neuroimaging component, participants, both those with diagnoses and those who serve as controls, will take part in various paradigms while undergoing functional magnetic resonance imaging. The paradigms include: a challenging attention task to learn if dissociation is associated with increased attentional control; an emotional probe in which participants view fearful, angry, and happy faces to reveal differences in how the brain processes information relative to specific diagnoses; and a resting state scan.

“In the resting state scan, subjects lie still and think about nothing in particular, which means they daydream,” said Lebois. “That enables us to see how the different networks in the brain talk to each other. We want to know: is there a difference in connectivity in people that have PTSD, the dissociative subtype, and DID?”

The researchers will also look at how genetic variability might influence the expression of dissociative symptoms in adult survivors of childhood trauma. “We will be taking saliva samples to investigate candidate genes—genes that have been shown in a small number of studies to possibly be associated with dissociation,” said Kaufman.

Past research—both clinical and carefully conducted neuroimaging provocation studies—provides insight into the symptoms and neurobiological correlates of PTSD. With their large-scale, cross-sectional study, Kaufman and Lebois are significantly expanding the paradigms and forms of dissociation that have been investigated to take those insights to the next level.

Classic PTSD is characterized by intrusive flashbacks, avoidance of salient reminders, and a constant state of high arousal and reactivity. It often results from an adult onset trauma, such as that experienced by a young woman Kaufman described who had witnessed a suspected gang-related shooting. “Following the event, she became hypervigilant, on guard all the time, ready to act.” said Kaufman. “Triggers of threats seemed to be everywhere.”

Among many brain regions, three key areas of the brain often take center stage in PTSD, explained Lebois: the ventromedial prefrontal cortex, which relates to executive function, cognitive control, and extinction learning, among other roles; the amygdala, which acts as what Lebois calls “a salience detector,” detecting important events and objects in the environment; and the insula, which is involved with self-referential processing, such as monitoring internal bodily states.

Lebois explained that when someone without PTSD experiences a threat, the amygdala fires up and signals other parts of the brain, including the brain stem and the motor cortex, to join forces to “coordinate a full-bodied stress response to deal with the threat.” When the threat passes, the ventromedial prefrontal cortex comes back on line, inhibiting amygdala activity. “In essence, the ventromedial prefrontal cortex is putting the brakes on amygdala activity,” she said.

With classic PTSD, however, communication between the amygdala and the ventromedial prefrontal cortex breaks down, permitting the amygdala to continue “running wild,” as Lebois puts it, even though the threat has passed.

A person diagnosed with the PTSD dissociative subtype exhibits the same symptoms as someone with classic PTSD plus two more—depersonalization and derealization. Kaufman described a young woman who exhibited this subtype following a brutal physical and sexual assault. “Her whole worldview had changed,” said Kaufman.

She had a striking sense of detachment from her thoughts, emotions, surroundings, and even her own body. “She knew she’d been assaulted, could remember details of the attack, but experienced it from a distance, as if she were watching herself undergo the trauma, feeling nothing,” Kaufman said.

People with DID exhibit all of the above symptoms plus a disruption of identity and recurrent gaps in recall. Such dissociation, Kaufman and Lebois stress, is nothing like the media portrayals of those with so-called multiple personalities. Rather, the person behaves in a way that, to their confusion, seems to be “not me,” said Kaufman, “as if someone inside her jumped out and acted in uncharacteristic ways. There is marked discontinuity in one’s own sense of self and one’s own sense of agency.”

“There is no better way to understand just what trauma means to a person than to listen deeply to his or her own words.”– Milissa Kaufman, MD, PhD

People with DID may make hard transitions between distinct behavioral states—for example, numb vs. intensely triggered. “The way of thinking is more compartmentalized,” said Kaufman.

The compartmentalization that characterizes dissociation can be a great defense mechanism—it can keep people feeling removed from their trauma and able to function in the world. However, when it goes too far or when triggers hit, said Kaufman, “it can wreak havoc on people’s lives.”

In the study, Kaufman and Lebois are collaborating with colleagues from across disciplines at McLean to broaden the reach of research into dissociative disorders.

“We have found that one of the most gratifying aspects of doing this research is how willing and open and grateful the women are to participate,” said Kaufman. “They feel like they’re giving back. It’s not easy because we’re asking them about their trauma history. It can be painful. But to a person, they have felt they are being helpful to others. These are people who don’t get asked about their stories. They’re glad someone is doing so now.”

In the Media: Dayton Families Sought for Study on Whether Trauma Can Be Inherited