John Kaneb, chairman and CEO of HP Hood LLC and a longtime friend and supporter of McLean Hospital, passed away on Sunday, August 29. He was 86. 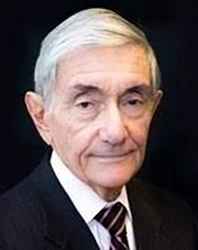 In addition to being an extraordinary businessman who built and led global corporations, including Northeast Petroleum, Catamount Petroleum—which became the controlling general partner of Gulf Oil Limited Partnership, and HP Hood LLC, Mr. Kaneb was dedicated to helping others by lending his time and support to mission-driven organizations, including McLean and Massachusetts General Hospital, as well as Partners HealthCare, now Mass General Brigham.

Mr. Kaneb was well-known and much beloved on the McLean campus. He joined the McLean community as a trustee in 1985, serving as chairman of the McLean Board of Trustees from 1989 to 1996. Well after Mr. Kaneb’s tenure ended as a trustee in 1999, he remained dedicated to McLean. He frequently attended committee meetings and hospital events, and eagerly served as an honorary member of the Board and a member of the hospital’s National Council—roles he held until his death.

“John believed deeply in the work of McLean and was fully invested in helping us deliver on our mission to improve the lives of people and families affected by mental illness,” said Scott L. Rauch, MD, president and psychiatrist in chief for McLean. “His generosity and generativity were boundless, volunteering his time, consistently providing steady leadership and wise guidance with great warmth, all the while showing a deep understanding and empathy for all. John will be missed by our entire community.”

In addition to his roles at McLean, Mr. Kaneb was a former trustee of Massachusetts General Hospital and Partners HealthCare and was chair of the Partners HealthCare finance committee for a number of years. Beyond his service to Boston health care organizations, Mr. Kaneb was a member of the Board of Fellows at Harvard Medical School, a trustee of the University of Notre Dame, and a director of the Innocence Project, an organization that seeks to exonerate innocent prisoners and prevent wrongful convictions.

Mr. Kaneb is survived by his loving wife, Ginny, six sons, five daughters-in-law, 18 grandchildren, and three great-grandchildren. A celebration of his life will be held on Saturday, October 9, 2021. Details will be forthcoming.