A publication of the McLean Hospital Nursing Department

The Fall 2017 issue of Nursing Network reflects on highlights from the national American Psychiatric Nurses Association annual conference as well as from McLean’s Fall Nursing Conference, which focused on recovery in motion. Nursing staff participated in a hospital-wide initiative to connect policy with practice. And Jane E. Crone, BSN, RN, was awarded the Marguerite Conrad Award for Teaching and Mentoring.

In the spring issue, the focus was on getting ready for eCare go live. Now, thanks to the many hours of training, practice, and managing new workflows, implementation was successful. With the new system, the changes for nursing staff are remarkable—moving from a documentation system that was almost entirely on paper to almost all electronic documentation. Granted, there have been bumps in the road and unexpected challenges, but the nursing staff has risen to the occasion. 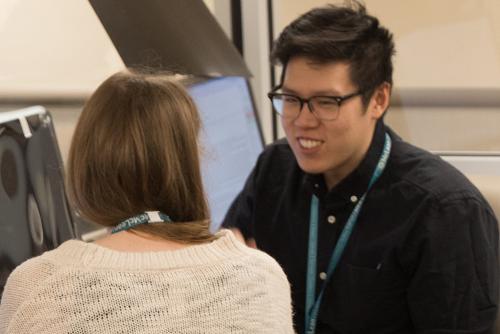 McLean Nurses Present Work During APNA Annual Conference
This past October, nursing representatives from McLean Hospital traveled to Phoenix, Arizona, for the American Psychiatric Nurses Association (APNA) 31st Annual Conference. The APNA annual conferences are the largest gatherings of psychiatric mental health nurses in the United States and are regarded as the premier event for psychiatric nursing.

Recovery in Motion: 2017 Fall Nursing Conference
On September 29, McLean held its 2017 Fall Nursing Conference in Pierce Hall on the Belmont campus. This year’s conference, titled “Recovery in Motion,” focused on bridging the connection between mental health and physical health. McLean Nursing was honored to host Dixie L. Thompson, PhD, and Lora Humphrey Beebe, PhD, PMHNP-BC, FAAN, from the University of Tennessee, Knoxville, as guest speakers for the event.

Bridging Policy, Research, and Practice
In July, several McLean clinicians received a crash course in behavioral health policymaking during a one-day trip to Washington, DC. They met with various players in the policy arena there, including representatives from the executive branch.

Jane Crone: Mentor, Teacher, Leader, Caregiver—And Now, Award Winner
Jane E. Crone, BSN, RN, is never afraid to advocate for her colleagues and her patients. In her quiet way, she will speak up when she believes someone is being treated unfairly. A natural teacher, Crone is her program’s CPR instructor, its electronic medical record expert, and an exceptional clinician who models top-quality nursing care. For these reasons and many more, Crone, the clinical coordinator for McLean’s Cognitive Neuropsychiatry Program, was recently awarded the Marguerite Conrad Award for Teaching and Mentoring at McLean’s fall nursing conference.

The Spring 2017 issue of Nursing Network focuses on three of our nurses. Jeannie Kingsley, RN, sees the positive effects of the garden outside the Admissions Building on patients and staff. Christopher A. Richard, BSN, RN, reports on his eCare implementation experiences at Brigham and Women’s Faulkner Hospital and how he is helping McLean nurses gear up for McLean’s go live. In the conclusion of her two-part series about her nursing career, Sheila Evans, MSN, RN, PCNS, finishes her story about her years at McLean.

Grounding in the Garden
In the enclosed courtyard behind the Admissions Building, where others see an expanse of ugly crabgrass, Jeannie Kingsley, RN, sees a huge garden bursting with fragrant, colorful perennials. She imagines a labyrinth that patients and staff can walk to soothe their thoughts and a pathway that weaves through different sections of the garden-to-be. Kingsley, a 30-year veteran of McLean and a nurse on the Short Term Unit, is determined to make her vision come true. “Magical things happen every day when you’re in a garden,” she says. “It draws patients out and puts them in a more positive frame of mind.”

Worry to Wonder: An EPIC Journey
What will it be like? Will I be able to learn it? Will my job or patients be affected because of this new system? Let me introduce myself. My name is Christopher A. Richard, BSN, RN. I was a clinical leader at Brigham and Women’s Faulkner Hospital and a super user during their Epic (electronic health record) go live two years ago. I had all the same questions, hesitations, and fears that our staff has now. I know that I won’t be able to change how you feel, but you can read about my experience and become hopeful. After all, I took a job at McLean knowing that I would be going through go live again.

My McLean Over the Years: From Nurse Educator to Blissful Retirement
Part II of a two part series. When Sheila Evans, MSN, RN, PCNS, left her research position with the Alcohol and Drug Center, the federal funding had changed, and she and the six other nurses interviewed on units for staff nurse positions. She was lucky enough to work on Codman III, a very psychodynamically oriented unit with many college and young adult aged patients. Many wonderful memories flood her mind when she thinks of her years there—it was a time of learning about the therapeutic milieu, the importance of boundaries, and nurse-patient relationships.

Yes, There Is a Big Difference Between Mental Health and Mental Illness

Coping With the Uncontrollable

Ask Me Anything About Emotional Regulation and BPD

END_OF_DOCUMENT_TOKEN_TO_BE_REPLACED

Coping With the Uncontrollable

Ask Me Anything About Emotional Regulation and BPD

Love Your Life Through the Science of Happiness