Perspectives 2016: A Publication of McLean Hospital

In this issue, read about McLean’s latest advances in treatment, education, and research. 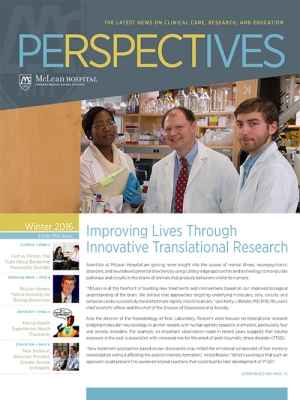 Improving Lives Through Innovative Translational Research
Scientists at McLean Hospital are gaining more insight into the causes of mental illness, neuropsychiatric disorders, and neurodevelopmental disorders by using cutting-edge approaches and technology to manipulate pathways and circuits in the brains of animals that produce behaviors similar to humans.

Fact vs. Fiction: The Truth About Borderline Personality Disorder
Borderline personality disorder (BPD), a complex mental illness often characterized by unstable moods, behaviors, and relationships, has historically been viewed by clinicians as untreatable.

McLean Announces $100 Million Campaign and Honors Former Congressman Patrick J. Kennedy
During the McLean annual dinner held in October 2015, the hospital publicly announced its $100 million Campaign for McLean Hospital. The largest and most ambitious in the hospital’s history, this comprehensive fundraising effort will advance the hospital’s mission to improve the lives of individuals and families affected by psychiatric illness.