Perspectives 2019: A Publication of McLean Hospital

Read about the latest in innovative treatment, cutting-edge research, and world-class training and education at McLean Hospital.

The Secret and Life-Changing Impact of Early Childhood Abuse: Dissociative Identity Disorder
The book Sybil and the subsequent 1976 movie in which Sally Field portrayed a girl with more than a dozen different personalities were the result of a collaboration between psychiatrist Cornelia Wilbur and author Flora Rheta Schreiber. The goal was to have people better understand a child abuse victim who developed alternative personalities as a coping mechanism. 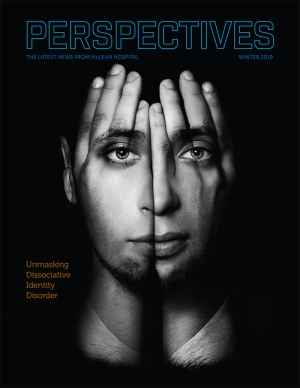 Deconstructing Stigma: I’m a Survivor
Robert is an accomplished scholar, a popular author, and a political heavyweight. He is also a survivor of child abuse that left unseen scars on his brain. Scars that resulted in mental health struggles, including alcoholism, bulimia, and dissociative identity disorder (DID)—formerly known as multiple personality disorder.

ECT Gave Me My Life Back
The memory is as fresh today as the feeling that night six years ago when I got up at around 2:30am and headed into the kitchen for a snack. It was as if a switch went off—but not the lights. It was the depression that had enveloped me for six years suddenly lifting.

Pathways Academy: Meeting the Needs of Students With Autism
Started in 2000, McLean Hospital’s Pathways Academy is a year-round school designed and dedicated to meeting the psychological, social, and academic needs of students aged 6 to 22 with autism spectrum disorder (ASD). There are two educators for every four students at Pathways, and each classroom has a maximum of four students. The Pathways program also offers the students significant clinical support.