PTSD: Can Genetics Affect Your Risk?

A majority of the U.S. population is exposed to a psychological trauma during their life. For certain people, such as police officers, firefighters, or soldiers, the risk of experiencing trauma is even greater. However, only a fraction of those who experience such events will develop post-traumatic stress disorder (PTSD) or other trauma-related psychiatric disorders.

The diagnostic criteria for PTSD, as outlined in the Diagnostic and Statistical Manual of Mental Disorders, define a qualifying trauma as exposure to “actual or threatened death, serious injury, or sexual violation.” Exposure may include directly experiencing the trauma, witnessing the trauma in person, learning about a traumatic event happening to a loved one, or “first-hand repeated or extreme exposure to aversive details” of a traumatic event.

Yet, if two individuals were to experience the exact same trauma, one might develop PTSD while the other remains unaffected by long-term psychiatric symptoms. Why might they experience these different outcomes?

Aside from trauma, a critical factor in developing PTSD is genetics. We’re already confident that genetic variations play an instrumental role in determining individual risk. However, we still need to pinpoint which genes are involved, how they may interact to affect risk, and what are the exact molecular mechanisms behind this. Similarly, we also need to isolate genetic factors that may be responsible for increasing one’s resilience to trauma—which is why some individuals do not develop PTSD or other disorders despite considerable exposure to trauma.

The gene known as FKBP5 is probably the best example we have thus far of a gene that interacts with the environment to promote the development of PTSD. We’ve learned a lot about this gene, including how it reacts when exposed to childhood trauma to increase the risk of developing depression or PTSD. 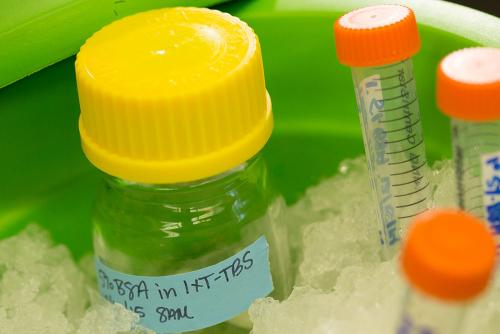 FKBP5 is essentially a regulator of the hypothalamus-pituitary-adrenal axis, our central stress response system, which is responsible for the release of cortisol, colloquially known as “the stress hormone.” Our biological response to stress is to release cortisol—in concert with several other factors—to prepare us to cope with stressful situations. However, a dysfunction in this process, resulting in an excessive or insufficient activation of this system, is likely to predispose one to developing PTSD, depression, and other psychiatric disorders.

We need to activate the release of cortisol when we are stressed, and shut it down once the threat is over. This enables us to calm down. Conversely, what we see in some patients with trauma-related disorders is that their cortisol release is stronger than normal, and they also have difficulty turning it off—keeping these patients in an unhealthy state of constant and heightened awareness, of always being “on guard.”

FKBP5 is only one gene in a complex system of genetic and environmental factors influencing disease risk. We believe that hundreds, perhaps thousands, of other genes are involved. For example, it’s more likely that changes within many genes, combined with how these genes interact with one another and the environment, are collectively responsible for an increased risk of developing PTSD.

As we learn more about the epigenetics of PTSD, we can then focus on prevention and treatment strategies. Recruitment for the military, police, and other professions where psychological trauma is a potential hazard of duty already includes psychological screening. It is therefore reasonable to suggest that genetic and epigenetic risk analysis could soon become part of the recruitment equation to protect vulnerable individuals from future exposure or provide those individuals with adequate immediate help in the case of a traumatic event.

Understanding risk also has implications for early intervention. We know when PTSD starts—immediately after trauma—which gives us the opportunity to predict its development before symptoms evolve. Developing such predictive models can help us to identify who would benefit most from immediate care following trauma and which type of care would be best.

We now have the necessary tools to develop these predictive models and improve the treatment of PTSD, which offers great hope for patients. However, we still have much more to learn.

You may also find this article on the Huffington Post.

Torsten Klengel, MD, PhD, is an assistant neuroscientist in the Neurobiology of Fear Laboratory led by Kerry J. Ressler, MD, PhD, and an instructor in psychiatry at Harvard Medical School. His research focuses on translational research of trauma-related psychiatric disorders. He seeks to understand the contribution of the non-coding transcriptome to the formation of fear memories in animals and the development of stress- and fear-related disorders in humans. In addition, Dr. Klengel is investigating the epigenetic effects of stress and trauma exposure, exploring animal models in combination with human samples.

How to Stop Questioning Your Self-Worth and Doubting Your Successes

Dr. Elizabeth McIngvale on Navigating the Challenges of OCD

Appreciating the Preciousness of Life