In this Year in Review you will find stories that capture key highlights for 2017.

Perhaps most notable among them was the completion of the largest and most complex single project in McLean’s greater-than-200-year history—our conversion to an integrated electronic health record, adopting Partners eCare. In tandem, emblematic of McLean’s role as an innovator, we launched the first-of-its-kind Institute for Technology in Psychiatry to enhance care effectiveness, access, and cost-efficiency, as well as enabling new, promising modes of research, by ushering in the field of digital psychiatry.

Through these exciting enterprises, we are transcending historical obstacles and becoming a more connected organization, on the forefront of a health care revolution, while respecting and maintaining our fundamental values.

These successes are a testament to McLean’s community—the clinicians, researchers, educators, administrators, donors, trustees, and volunteers who passionately pursue our mission of improving lives of individuals and families affected by psychiatric illness. 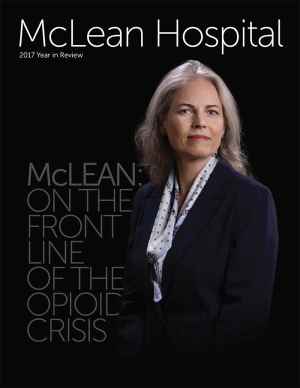 Partnership Helps Public Schools Support Student Mental Health
Growing up has never been easy. Multiply the normal angst of the teenage years by the deluge of social media. Then add the realities of post-9/11 societal stress, poverty, homelessness, anxiety, depression, and substance misuse, and you have a new reality.

Paying Dividends for Students and Staff
The increase in anxiety in today’s students takes a toll not only on the youngsters, but also on the education professionals who work to help them through their days.

Using New Technology to Track Senior Health
Mounted on the wall in David’s room at an assisted living facility west of Boston is a small, white box. The box houses a highly sophisticated sensor called Emerald, and it is helping clinicians find better ways to care for seniors, especially those with mental illness.

An Eye on the Future: Carol Vallone Takes on New Role as Chair of the Board
As a member of the McLean Board of Trustees for more than a decade, Carol Vallone has had a bird’s-eye view of the hospital’s performance. Now, in her 11th year and poised to take on the role of chair, Vallone is looking toward the future and is eager to build on the strong foundation laid by her predecessors.

On the Front Line of the Opioid Crisis
It was a problem we never used to speak about, something that afflicted those “down on their luck” or residents of “skid row” who could not cope with their lives. They dealt with those challenges with alcohol and drug misuse, the drug of choice frequently heroin. Today, addiction—particularly to opiates like heroin and synthetic opioids like oxycodone and fentanyl—affects all levels of society and is finally being considered a national public health emergency.

Opioid Addiction: Exploring Scientific Solutions
The ultimate solution to the opioid crisis is answering the question of what causes addiction and whether it is possible to treat it more effectively or even prevent it. That’s the challenge Elena H. Chartoff, PhD, is taking on in her laboratory.

How Can Policy Changes Combat the Opioid Crisis?
When the White House assembled a commission to address how to combat the nation’s opioid crisis, the administration called upon current and former elected officials with a background in administration, law enforcement, and addiction. And Bertha K. Madras, PhD.

Investing in Unmet Needs
Samuel Plimpton and Wendy Shattuck target their giving to organizations that leverage gifts to achieve returns for society. Sam, senior advisor and partner emeritus at the Baupost Group, LLC, is interested in the long-term value created through investment to address unmet needs.

Ana’s Marathon Fund: Running Against Stigma, Not Away From It
On April 17, 2017, Ana Febres-Cordero, a suicide survivor, and her father Rafael ran the Boston Marathon to support public awareness and outreach programs focused on eliminating the stigma surrounding mental illness.

An Epic Leap Into the Future of Health Care
At 5am on June 24, 2017, McLean Hospital took a giant leap into the future of health care as it flipped the switch and officially “went live” with an electronic health record (EHR). The EHR, which is built using the Epic platform and is known as Partners eCare, is the largest infrastructure endeavor ever undertaken by McLean.