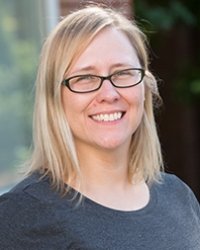 Dr. Sromek is the director of the Medicinal Chemistry Laboratory at McLean Hospital and an assistant professor of psychiatry at Harvard Medical School.

Through her research at the Medicinal Chemistry Laboratory at McLean Hospital, Dr. Sromek develops tools to examine neurotransmitter signaling systems in the brain, which can point to the presence of disorders such as schizophrenia and Parkinson’s disease well before physical symptoms are apparent.

Specifically, she seeks to develop highly specific ligands that can identify subtle changes in monoaminergic neurotransmitter systems and signaling irregularities in the early stages of different neurological and neuropsychiatric disorders before significant changes occur in the brain. Identification of these disorders at an early stage may offer the best window for early treatment. To accomplish this, Dr. Sromek and her colleagues use noninvasive imaging techniques, including PET imaging, to probe changes in the brain.

An area of particular interest to Dr. Sromek is the development of agonist dopamine D2 receptor PET radioligands, which may selectively detect the active form of the D2 receptor. Such a tool may help detect Parkinson’s disease, schizophrenia, restless legs syndrome, Tourette syndrome, and others in early stages before a clinical diagnosis is confirmed. Additionally, such a tool can be used to confirm a clinical diagnosis, especially for those diseases that are frequently misdiagnosed.