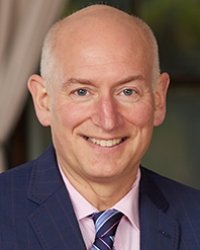 Brent P. Forester, MD, MSc, is the chief of the Division of Geriatric Psychiatry at McLean Hospital and medical director for Dementia Care and Behavioral & Mental Health Population Health Management at Mass General Brigham. Dr. Forester is an expert in geriatric psychiatry, specializing in the treatment of older adults with depression, bipolar disorder, and behavioral complications of Alzheimer’s disease and related dementias. He is co-president of the American Association for Geriatric Psychiatry (AAGP), a distinguished fellow of the American Psychiatric Association, and has previously served on the board of director of the Alzheimer’s Association of Massachusetts/New Hampshire and was chair of their Medical Scientific Committee.

Dr. Forester leads the Geriatric Psychiatry Research Program, founded in 2000, and the Geriatric Mood Disorders Research Program, founded in 2005. He is dedicated to pursuing a better understanding of the relationship between brain function and behavioral symptoms of Alzheimer’s and related dementias in older adults. He also researches the neurobiological causes and correlates of mood changes and disorders in later life, and the relationship between cognitive impairment and mood changes. Dr. Forester and his team are committed to helping develop and test novel treatments that will improve quality of life for older adults.

Behavioral symptoms of dementia (now known as major neurocognitive disorder) are an important target for research and treatment. Symptoms such as agitation and aggression are the most challenging obstacles to continued care in the home setting, and lead to caregiver stress and burnout. They are highly associated with excess morbidity, mortality, and long-term care placement. Dr. Forester and his team pioneered the use of ECT in treating behavioral symptoms in patients with major neurocognitive disorder. Their pilot studies suggest that ECT is an effective and safe treatment for agitation and aggression in dementia. Dr. Forester is now leading a national, multisite, NIA funded controlled study of ECT plus usual care compared with simulated-ECT plus usual care for the treatment of severe agitation and aggression in Alzheimer’s dementia.

Dr. Forester’s pilot study on endocannabinoids to reduce agitation in patients with major neurocognitive disorder demonstrated safety and efficacy for dronabinol, a synthetic cannabinoid. Dr. Forester and his team are currently conducting an NIA-funded, multisite, randomized controlled trial of dronabinol in the McLean’s Cognitive Neuropsychiatry Program, an inpatient program, and Geriatric Psychiatry Outpatient Services. They are also collaborating with McLean’s Dr. Staci Gruber on a foundation-funded study to determine the effects of medical cannabis on anxiety and agitation in individuals with Alzheimer’s dementia.

Dr. Forester and his staff explore promising avenues to earlier diagnosis and expanded treatment options for older adults with neurocognitive disorders. The IDEAS study investigated the use of a PET imaging scan to look for evidence of amyloid deposits—or deposits of an abnormal protein implicated in Alzheimer’s disease—in people who are experiencing mild memory problems.

People in the early stages of neurocognitive disorders often experience depressive symptoms, and depressive episodes that emerge in later life may indicate a developing neurocognitive disorder. However, evidence also shows that younger adults with depression are at heightened risk for developing major neurocognitive disorder later in life. Treatments for major depression and bipolar disorder in older adults are poorly studied, but are urgently needed as both disorders are risk factors for cognitive impairment and suicide. Dr. Forester aims to better understand the neurobiological causes of mood changes in older adults, and focuses on translating these findings into effective, safe, and targeted treatments.

Dr. Forester’s team is investigating the relationship between mood changes in later life and neurocognitive disorders using imaging techniques and biomarkers in their study on mood changes in adults with mild cognitive impairment. Dr. Forester is also running a longitudinal study tracking neuropsychiatric changes that occur with aging in patients with mood disorders and in healthy controls. The team’s multidisciplinary approach incorporates clinical, neuropsychological, medical, genetic, and structural and functional imaging data, and has high potential for personalizing medicine to help older adults with depression or bipolar disorder.

Dr. Forester and his staff offer clinical trials of novel treatments for older adults with mood disorders. They are currently studying the neurobiological effects of a low frequency magnetic stimulation device (LFMS) in older adults with bipolar disorder who are currently depressed. They were previously involved in a study assessing how a genetic test that provides clinicians with information on genetic markers of psychiatric medication metabolism in individual patients can help guide psychopharmacological treatment of depression.