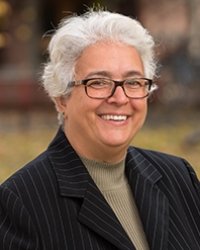 Franca Centorrino, MD, oversees a multidisciplinary team of clinicians treating outpatients with schizophrenia or bipolar disorder. Her research activities focus on the use of psychotropic medications for the treatment of schizophrenia and bipolar disorder and the management of side effects associated with these medications. Dr. Centorrino also supervises psychiatric residents and research fellows at McLean Hospital.

Dr. Centorrino’s Psychopharmacology Research Program was founded in 1992 to study the impact of psychotropic medications on patients who have schizophrenia or bipolar disorder, including newer treatment approaches and the management of their side effects.

Dr. Centorrino’s naturalistic studies arise from clinical practice in McLean’s Division of Psychotic Disorders. She explores the population-wide, long-term, real world application of psychiatric medications, comparing treatment outcomes and cost effectiveness. Her research has demonstrated that combining medications is common and can result in increased effectiveness and reduced side effects (though in some patients can lead to increased side effects). These findings help promote the individualized tailoring of medication to improve patient care and outcomes.

In addition, Dr. Centorrino studies the adverse side effects of antipsychotic medications in some patients, including monitoring for metabolic syndrome characterized by weight gain and cardiovascular complications. She has shown that the division’s wellness program for people taking psychotropic medications can often lead to healthier behaviors and lifestyle changes.

Dr. Centorrino evaluated prevalence and risk factors for metabolic syndrome in severely or chronically ill inpatients treated with antipsychotics, with or without other psychotropic drugs. With prior antipsychotic treatment, prevalence of metabolic syndrome was 30%. The syndrome was strongly associated with being overweight, older age, longer treatment exposure, schizoaffective diagnosis, more illness episodes or hospitalizations, polytherapy, and higher total daily chlorpromazine-equivalent doses, but not gender. The risk was surprisingly high in young persons and after brief treatment exposure. Psychotropic polytherapy increased the risk.

Treatments given to patients with primary psychotic disorders include mood stabilizers (MSs) combined with other psychotropics, despite the limited evidence of efficacy, safety, and lack of regulatory approval. Dr. Centorrino found the use of MSs extended the duration of hospitalization by an average of 18%, while Clinical Global Impression ratings improved by 55% and adverse-effects risk was lower by 22%. MSs, usually in combination with antipsychotics, were used increasingly for inpatients over the past decade, including for patients with primary psychotic disorders. The effectiveness and safety of this practice remain to be evaluated adequately.