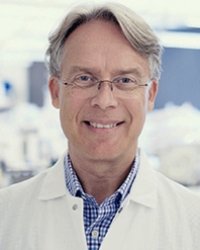 Dr. Ole Isacson is a professor of neurology at Harvard Medical School and founding director of the Neuroregeneration Research Institute at McLean Hospital. His work is focused on the understanding and treatments of neurodegenerative disease, with particular emphasis on distinguishing critical mechanisms and treatments of neuronal vulnerability at the onset of disease, or new restorative treatments using stem cells after symptoms. He is author or co-author of over 300 scientific research articles and several books in his field.

Dr. Isacson’s professional appointments include member of the Scientific Advisory Board of the Harvard NeuroDiscovery Center, principal faculty of the Harvard Stem Cell Institute, member of the Executive Scientific Advisory Board of the Michael J. Fox Foundation (2014-2016), elected fellow of the American Association for the Advancement of Science (AAAS, 2014), member of the FDA Cellular, Tissue and Gene Therapies Advisory Committee (CTGTAC), and editor-in-chief of the journal Molecular and Cellular Neuroscience.

The Neuroregeneration Research Institute (NRI) at McLean Hospital was founded by Dr. Isacson in 1989 and is now co-directed by Isacson and Penny Hallet, PhD. Recent data from Dr. Isacson’s and Dr. Penny Hallett’s work shows that with degenerative aging, many people develop lipid and protein abnormalities, lysosomal storage diseases, and related cell biological problems without being aware of it. The NRI researchers feel that many cases of Parkinson’s disease (PD) and related disorders are in fact “acquired” with age as lysosomal storage diseases or other PD-linked pathogenetic problems—including the LRRK2 protein—cause changes in many cell types and their interactions throughout the body.

This concept of age-dependent “phenocopy” of the classic familial PD genetic risks is relatively new. Given that these pre-degenerative brain aging changes put people at risk, Dr. Isacson’s lab is discovering the factors and biomarkers that can determine degenerative brain aging, including Parkinson’s, cognitive disorders, and Alzheimer’s disease. With these new cellular diagnostics, normal function of cells and brain circuitry can be reestablished by new treatment and medicines to prevent inflammation of brain cells and tissue that leads to neuron degeneration and death. To accomplish these goals, several new projects have been designed to explore and determine the science behind degenerative and pathological brain aging.

While Dr. Isacson’s work could succeed in providing neuroprotection to delay onset and progression of disease, over time, many people would still experience significant neurodegeneration and cell loss that cause the symptoms. To help PD and other patients at that stage, Dr. Isacson and the NRI are at the forefront of regenerative medicine for brain disorders. Dr. Isacson’s lab has made numerous landmark discoveries in the area of novel treatments for PD. In 2002, the lab proved that transplanting embryonic stem cells in animal models of Parkinson’s disease yielded functional new dopamine neurons that restored motor function. Taking this work a step further, in 2008, the NRI was the first to show that specific midbrain dopamine neurons could be obtained from skin cells that had been reprogrammed into stem cells (becoming induced pluripotent stem cells, or iPS cells). These new dopamine neurons were effectively transplanted into the brain, again in animal models. In 2010, the lab made the exciting breakthrough that such dopamine neurons could be grown from human iPS cells and transplanted effectively to mitigate disease, setting the stage for forthcoming clinical trials in humans.