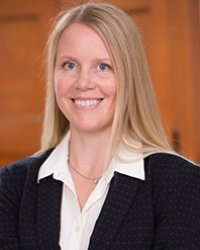 Teresia Osborn, PhD, graduated from Gothenburg University with a MS in pharmaceutical bioscience in 2002 and a PhD in leukocyte biology in 2007. Throughout her graduate studies she was also a research fellow at the Division of Translational Medicine at Brigham and Women’s Hospital. She joined the Neuroregeneration Research Institute (NRI) at McLean Hospital in 2008 as a post-doctoral research fellow. In 2012, she was promoted to instructor in psychiatry at Harvard Medical School and assumed the role of director of in vitro programs at the NRI.

Dr. Osborn is an investigator at the NRI with an interest in preclinical translational science toward therapeutic interventions for neurodegenerative disorders such as Parkinson’s disease, Alzheimer’s disease, and amyotrophic lateral sclerosis (ALS). One of her current main research projects involves development of autologous cell therapy for Parkinson’s disease, work that is funded by a NIH CREATE Bio research award.