Lecture – Discontinuation of Psychotropic Drugs – Update on a Prevalent Problem

Treatment discontinuation has broad implications that are not always adequately appreciated. It is commonplace clinically as well as in experimental trials of psychotropic drugs.

Several types of adverse effects are associated with discontinuing psychotropic drugs [Baldessarini & Tondo 2019; Tondo & Baldessarini 2020]. First are early reactions arising within hours or days after discontinuing many psychotropics. They include apparently physiological withdrawal-like syndromes but can also include rapid emergence of other new symptoms. Such reactions are detailed in the 43 items of the Discontinuation-Emergent Signs and Symptoms (DESS) [Rosenbaum et al. 1998].

In addition to somatic and sensory phenomena, reactions can include symptoms also found in illnesses being treated (especially depression and anxiety), or novel syndromes [Baldessarini & Tondo 2019]. These include:

Second, and usually somewhat later, symptoms of illnesses being treated can recur more often, sometimes more severely, and much more rapidly than predicted by the natural history of untreated illness, including by comparison to a patient’s own history. Usually such episodes arise over weeks rather than hours or days, characteristic of initial withdrawal-emergent reactions.

Of note, none of these iatrogenic complications was mentioned in a recent, large national survey of co-occurring conditions associated with major psychiatric disorders, probably owing to lack of categorical designations for such conditions in national health information registries [Plana-Ripoli et al. 2019]. Such categorization could easily be incorporated into DSM and ICD diagnoses.

Typically, in adults and juveniles, reactions arise after discontinuing treatment after many weeks or months of treatment, and more likely if relatively high doses of short half-life agents are removed or reduced suddenly or rapidly [Fava et al. 2015, 2018; Baldessarini & Tondo 2019]. Withdrawal reactions are especially likely with paroxetine and venlafaxine, probably less with most other SRIs or SNRIs, and still less with long-acting fluoxetine and older antidepressants [Fava et al. 2015; Baldessarini & Tondo 2019].

In a review of nine reports, among 632 patients discontinuing an SRI, withdrawal-emergent reactions were identified in an average of 33.2% [Bhanji et al. 2006]. Such reactions typically emerge within hours or a few days after major reductions of dose or complete removal of a suspect agent. They can persist for widely different times, from days or a few weeks, and less often, to many weeks or even months [Khan et al. 2014; Fava & Belaise 2018]. A reassuring finding is that evidence of withdrawal symptoms in neonates born to mothers taking SRIs was not found in one study [Yang et al. 2017].

Adaptive changes include supersensitivity of dopamine receptors in forebrain following prolonged exposure to antipsychotic and other antidopaminergic agents [Tarsy & Baldessarini 1974], as well as desensitization of serotonin receptors and autoreceptors after prolonged exposure to SRIs and SNRIs, additional adaptive changes in noradrenergic mechanisms with SNRIs and tricyclic antidepressants, and responses to antimuscarinic effects of paroxetine and tricyclic antidepressants. How such neuroadaptive changes produce specific withdrawal-emergent symptoms remains unclear. The situation is even more complex when discontinuation involves increasingly prevalent combinations of psychotropic drugs [Lander et al. 2018].

Optimal treatment for psychotropic drug withdrawal-emergent reactions remains uncertain. Restarting the withdrawn medicine, even temporarily and at lower doses, usually leads to reduction or remission of symptoms, supporting their classification as withdrawal-associated reactions, but does not solve the problem of safe discontinuation. A widely accepted clinical practice is gradual reduction of doses of psychotropic drugs including SRIs, to improve the safety of treatment discontinuation [Fava et al. 2007].

However, studies aiming to test the prediction that slow removal of drugs can reduce risk of withdrawal reactions are rare and most have major design limitations. These include lack of adequate controls, small numbers of subjects, multiple drugs with major pharmacokinetic differences, and short discontinuation times with few downward steps in dose, or lack of evaluating DESS items prior to discontinuation [Fava et al. 2007; Gallagher et al. 2012; Khan et al. 2014].

Alternative suggestions, in addition to switching to, and then gradually removing fluoxetine, include use of an anticonvulsant or clonazepam, although none of these options has undergone rigorous testing for efficacy and safety; in addition, psychotherapy may or may not be helpful [Fava & Belaise 2018; Scholten et al. 2018]. In short, evidence concerning the value of slow discontinuation of drugs including modern antidepressants to minimize or avoid withdrawal reactions is limited, inconsistent, and often based on sub-optimal study designs. Nevertheless, this standard practice might be improved by use of very prolonged dose-reductions, especially of SRI antidepressants.

Also of great clinical importance is the phenomenon of treatment discontinuation-associated increase in risk and earlier relapse (re-emergence of a most recent, and possibly not fully remitted, episode) or recurrence (new episode) of illnesses being treated. We have described this phenomenon following discontinuation of lithium [Suppes et al. 1991,1993; Faedda et al. 1993; Baldessarini et al. 1996, 1997], antipsychotics [Viguera et al. 1997], and antidepressants [Viguera et al. 1998; Baldessarini et al. 2010]. It is probably only partly a reflection of the return of illness without treatment and likely to involve treatment-discontinuation itself as a significant stressor. That is, discontinuing treatment is evidently not equivalent to being untreated.

Support for earlier, more frequent, and possibly more severe relapse or recurrence as an effect of treatment discontinuation includes comparisons with the same patients prior to the start of treatment to evaluate the natural history of their untreated illness [Suppes et al. 1991, 1993], as well as major differences in risk of new or early illness with gradual versus abrupt or rapid discontinuation of treatment [Suppes et al. 1993; Baldessarini et al. 1997; Lejoyeaux & Adés 1997]. Reduction of post-discontinuation relapse and recurrence by gradual dose-reduction and use of slowly cleared agents supports expectations that risk or severity of earlier-occurring withdrawal can also be modified by slow discontinuation.

Withdrawal reactions and post-treatment-discontinuation clinical worsening complicate clinical treatment in circumstances involving drug discontinuation, major dose reductions, or repeated changes of treatment—all of which are likely to exert destabilizing effects. In addition, such responses are very likely to affect the design, conduct, outcome, and interpretation of randomized, experimental therapeutic trials, particularly when placebo controls are involved.

In modern experimental trials, most human subjects will have been treated previously and so undergo a change in treatment status. It follows that effects of previous treatment and its discontinuation may impact the findings of most controlled trials. These effects can include both carryover and discontinuation effects. That is, the benefits and adverse effects of prior treatment, even after it is discontinued, are likely to continue into the early days or even weeks of a new treatment trial—respectively, exaggerating apparent benefits of a new treatment and either blunting (carryover effect) or increasing (discontinuation effect) the impact of randomization to placebo, as well as misleadingly increasing ratings of adverse effects for a time.

In addition, shifting from either previous or new active treatment to placebo, as in “continuation” trials, can make for particular problems, including an inflated risk of relapse with placebo to exaggerate drug-placebo contrasts. Such trial designs are currently prevalent and often considered to offer evidence of long-term beneficial effects. However, they risk exaggerating contrasts in morbidity between subjects continuing on a treatment that has just proved effective for them vs. being withdrawn to an inactive placebo while still recovering from an index episode of acute illness.

Such designs are commonly considered “enrichment” trials (selecting subjects who responded initially to a treatment of scientific or commercial interest) or “continuation” (really discontinuation) trials. Those designations tend to obscure biasing based on removing treatment from subjects selected for “responding” initially (partial reduction of symptom ratings) and then having treatment removed, sometimes relatively rapidly and when an index episode of illness is not yet fully resolved, so as to increase relapse risk [Baldessarini 2013].

Abrupt discontinuation of drugs is very prevalent with pregnancy, typically driven by fear of fetal teratogenic effects and associated concern about legal liability, but risking greatly increased adverse clinical effects on the mother and unknown impact on the fetus. In addition, pregnancy can alter metabolic elimination of other prescribed medicines with which SRIs can interact pharmacokinetically [Cohen et al. 2006; Viguera et al. 2007; Baldessarini 2013].

Notably, risk of relapse of major depression during pregnancy was much greater after discontinuing antidepressant treatment [Cohen et al. 2006]. Discontinuing lithium maintenance treatment in women with bipolar disorder led to similar risk of a new illness episode (60% within nine months), in both age-matched pregnant and nonpregnant women, especially following rapid discontinuation [Viguera et al. 2000]. Similarity of risk with and without pregnancy suggests treatment-discontinuation itself as a greater risk-modifying factor than pregnancy itself.

Moreover, a markedly increased risk of new episodes of bipolar disorder during pregnancy followed discontinuation of various mood-stabilizers. Most of the risk was depressive or mixed, highest in the first trimester, and was followed by an even more severe risk of new affective or psychotic illness soon after delivery without mood-stabilizing treatment through pregnancy [Viguera et al. 2007].

A final question is whether returning to a discontinued treatment may involve compromised future benefit. The general answer to this question is unknown for most psychotropic drugs but, at least for lithium in bipolar disorder, we found minimal loss of benefit from treatment on a second or even later re-trials [Tondo et al. 1997].

They can also compromise the scientific soundness of research, especially in trials that involve discontinuing a previous or current active treatment to placebo. They may also challenge the content and conduct of the informed consent process, particularly when a consequence of trial design or change of clinical treatment may include risks of provoking relapse or recurrence of clinically significant illness.

Trials involving discontinuation of an effective treatment are especially likely to produce exaggerated differences in morbidity between continuing treatment vs. discontinuing to placebo. Exaggerated risk of relapse with placebo can be minimized by allowing sufficient treatment-time to reach full clinical remission, though with greater time and costs involved.

Current needs include refinement of the distinction between early withdrawal-associated reactions and later, post-treatment-discontinuation re-emergence of psychiatric illness, as well as evidence-supported means of avoiding or managing them.

Increasingly recognized clinical syndromes associated with discontinuing psychotropic medicines may be worth considering as disorders in DSM and ICD. They are specific syndromes requiring optimized treatment, similar to currently classified withdrawal syndromes of abused substances.

Research designed to test for the impact of the timing and rate of discontinuing psychotropic treatments remains rare, inconsistent, and inconclusive, particularly with respect to early withdrawal reactions commonly encountered with short half-life SRIs and venlafaxine. Findings are more consistent with respect to later increased risk of discontinuation-associated re-emergence of the illness being treated, including both mood and psychotic disorders.

Accordingly, discontinuing psychotropic medicines as slowly as circumstances permit is a prudent clinical and research policy as we await adequate investigations aimed at testing for ways of conducting drug discontinuations. 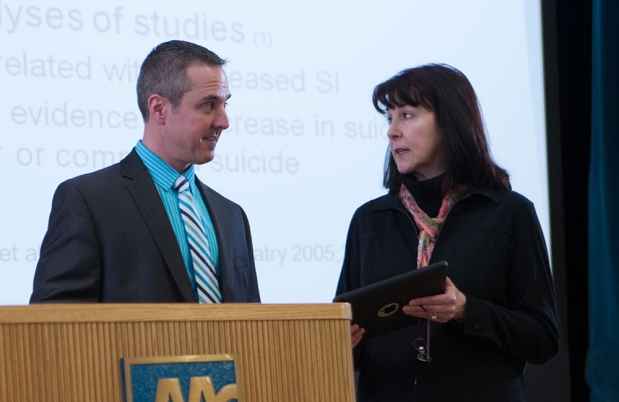 In the Media: Online Continuing Education Gets Mixed Reviews

How One Clinician Helps People Find Their Path