In June, Jane Fonda helped bring public focus to women’s mental health by accepting the McLean Award at our annual dinner. We announced several important gifts at this event; one of which supports McLean’s newest Division of Women’s Mental Health and will fund research into trauma disorders. This work is now spawning discussion in the community about mental health of women and girls.

In September 2013, McLean launched the Division of Women’s Mental Health with Shelly F. Greenfield, MD, MPH, as its chief. We recently sat down with Dr. Greenfield to talk about the division’s roots, goals, and projects. With the topic of mental health becoming more prominent in our public discourse, McLean has new opportunities to shape the conversation. Philanthropy has a special role in turning people’s attention to important issues.

Another gift helps McLean recruit a world-renowned scientist as our next chief scientific officer who will bring new expertise and leadership in translational science. 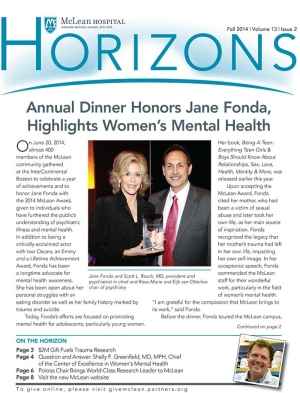 Annual Dinner Honors Jane Fonda, Highlights Women’s Mental Health
On June 20, 2014, almost 400 members of the McLean community gathered at the InterContinental Boston to celebrate a year of achievements and to honor Jane Fonda with the 2014 McLean Award, given to individuals who have furthered the public’s understanding of psychiatric illness and mental health.

$2M Gift Fuels Trauma Research, Shapes Center for Women’s Mental Health
McLean Hospital recently received a $2 million gift from an anonymous family that will have far-reaching impact on the field of trauma disorders and, in particular, a special influence on women’s mental health.

Poitras Chair Brings World-Class Research Leader to McLean
For longtime donors and McLean National Council members Pat and Jim Poitras, supporting new discoveries in psychiatry has been a common thread in their philanthropy. That is why they have, for many years, invested in research at McLean Hospital.