We open our Fall 2017 edition of Horizons with the wonderful news of two major gifts, both of which will make a tremendous impact on McLean’s ability to further our mission of improving the lives of individuals and families affected by psychiatric illnesses.

The first is a foundation gift to endow the Harvard Brain Tissue Resource Center—or as it is more commonly called, McLean’s “Brain Bank.” This is a remarkable global contribution to science, as the Brain Bank is the largest of its kind, and its tissue samples are distributed to investigators all over the world. The second is an equally spectacular and forward-thinking gift. Thanks to an anonymous family, we have established an Initiative for Integrated Trauma Research—a program that will allow us to better understand the crucial role of trauma in psychiatric illness.

We are also thrilled to share the launch of an innovative new clinical program. The Program of Assertive Community Treatment (PACT) brings clinicians into individuals’ homes and local communities to best meet the ongoing needs of those coping with chronic psychiatric disorders. And finally, you’ll read about a fascinating study that aims to identify natural and non-invasive methods for treating the epidemic of depression in the nation’s adolescent population. 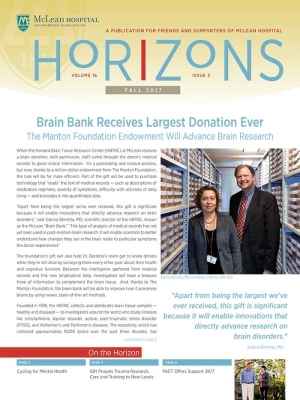 Brain Bank Receives Largest Donation Ever: Manton Foundation Endowment Will Advance Brain Research
When the Harvard Brain Tissue Resource Center at McLean receives a brain donation, with permission, staff comb through the donor’s medical records to glean critical information. It’s a painstaking and manual process, but now, thanks to a million-dollar endowment from The Manton Foundation, the task will be far more efficient.

Cycling for Mental Health
Mac Dorris is a guy who gets things done. He had a vision to create a charity bike ride for mental health, and within a short six months of intensive planning, Mac hosted The Ride for Mental Health—the first of what he hopes will be an annual event that will change how people think about mental illness.

Gift Propels Trauma Research, Care, and Training to New Levels
McLean is home to a number of prominent clinicians who provide some of the country’s most specialized care for individuals struggling with complex post-traumatic stress disorder (PTSD). Its researchers are leading the scientific front by exploring the environmental, genetic, and neurobiological components of trauma-related disorders. And the hospital has a growing effort to disseminate models of trauma-informed care across the full spectrum of its clinical programs.

New PACT Team Offers Support 24/7
Monica Luke knows what it’s like to care deeply about someone with schizophrenia. Her son, now 37, had his first psychotic break at age 20 and hasn’t spoken to her in a decade. Although she’s pained by the estrangement, she’s thankful for one thing: she could use his college fund to pay for his care over the years. But many families whose loved ones struggle with chronic mental illness are not so fortunate.

Foundations Support Study on the Benefit of Yoga for Adolescent Depression
Yoga has become ubiquitous. In fact, it is difficult to find a community that doesn’t offer classes ranging from “flow” and “hot” yoga to those with nearly unpronounceable names. Tracing roots back more than 5,000 years, yoga is an array of techniques or practices aimed at integrating mind, body, and spirit to promote mindfulness, personal exploration, and a compassionate relationship between body and self.