At McLean, we often talk about how we serve people across the life span. In this edition of Horizons, we share stories that illustrate the breadth of that commitment.

You’ll read two articles about programs for adolescents and young adults—the more than 60-year-old Arlington School and the newly launched STAR (Support, Treatment, and Resilience) Program. For both, philanthropy is providing critical support and helping young people realize their dreams.

We also share an update about the growing group of dedicated women who compose McLean’s Women’s Mental Health Leadership Council. Despite not being able to gather in person this past year, which had been a central activity, these women—who span three generations—found new ways to stay connected to McLean’s pioneering work in the field of women’s mental health.

At the other end of the life span, you’ll read about an enduring friendship between two boys that later became a source of great comfort while navigating the devastating course of an Alzheimer’s diagnosis. And finally, we give you a brief glimpse into the remarkable life of our former director and his nearly 70-year relationship with McLean. 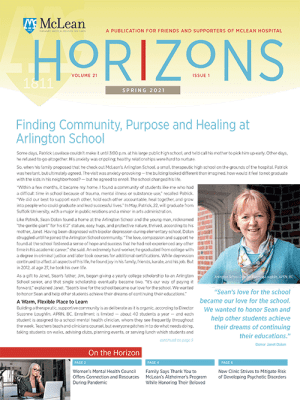 Finding Community, Purpose, and Healing at the Arlington School
Some days, Patrick Lovelace couldn’t make it until 3pm at his large public high school, and he’d call his mother to pick him up early. Other days, he refused to go altogether. His anxiety was crippling; healthy relationships were hard to nurture. So, when his family proposed that he check out McLean’s Arlington School, a small, therapeutic high school on the grounds of the hospital, Patrick was hesitant but ultimately agreed. The visit was anxiety-provoking—the building looked different than imagined, how would it feel to not graduate with the kids in his neighborhood?—but he agreed to enroll.

Women’s Mental Health Council Offers Connection and Resources During Pandemic
Despite the limitations imposed by the pandemic, 2020 was a year of robust activity for the Women’s Mental Health Leadership Council, a group of women that has been gathering for years to discuss mental health topics. Established in 2016, the group comes together to learn from McLean experts about mental health concerns specific to women and girls. Members provide philanthropic support for the hospital’s pioneering work in the field.

Family Says Thank You to McLean’s Alzheimer’s Program While Honoring Their Beloved
Rosalie Rudnick collected friends like she collected Caucasian rugs—easily, passionately, and in large numbers. “The world loved Rosalie,” said Mitch, her husband of 60 years. “She was charming and befriended everyone who came near her.” Even after Alzheimer’s disease robbed her of almost everything that made her Rosalie, upon arriving at the memory care unit where she lived at the end, she immediately befriended the lead nurse.

New Clinic Strives to Mitigate Risk of Developing Psychotic Disorders
Schizophrenia, schizoaffective disorder, and bipolar disorder with psychotic features are diagnoses laden with stigma, and they can sound downright frightening. Child psychiatrist Perihan Esra Guvenek-Cokol, MD, an expert in psychotic disorders, doesn’t dispute their seriousness. But she knows that with the right care, people with these diagnoses can go on to live happy, fulfilling lives.

Saying Thank You for a Life and a Career
McLean Director Emeritus Francis de Marneffe, MD, has chronicled many of his 96 years in two memoirs and is putting the finishing touches on a third. His life is brimming with stories. At age 16, he bicycled from Belgium across France just as the Germans invaded in 1940. He became a pilot in Britain’s Royal Air Force during World War II, and after the war, he returned to medical school in London and graduated in 1950, when he came to the United States to begin a nearly 70-year relationship with McLean Hospital.