My name is Amanda Casparriello, and I have been a nurse for six years. I work in the Geriatric Psychiatry Inpatient Services on South Belknap 2, which is a geriatric neuropsychiatry floor. Our patients present with some sort of cognitive decline mixed with changes in behavior. Dementia is our most common diagnosis. Our treatment goals are different from those of other units: often, we focus on palliative care—keeping people comfortable by relieving their agitation or pain, for example—not “curing” them.

Patients are admitted when there has been a change in their cognition or behavior, which may be making their current living situation untenable. We help assess their situation and then might recommend, if living at home is no longer an option, transitioning to an assisted living facility, nursing home or hospice. Their length of stay on our unit is typically less than two weeks.

Harry arrived in late June 2011. He was in his early 60s, slight of build with light coloring. He had been married for 28 years and had a college-aged son. Before he became ill, Harry had been a brilliant, highly respected, much-loved sociology professor and writer of books about world peace. He started to show the first signs of cognitive decline in his early 50s, when his son was 12 or 13. In addition to his dementia, he had significant cardiac issues, a seizure disorder and a history of Lyme disease. He’d had an hypoxic encephalopathy status post a cardiac arrest.

Harry had briefly been a patient on our unit a couple of years earlier. During that stay, he’d had a medication adjustment to help with insomnia and “sundowning,” a symptom of dementia marked by increased confusion and agitation as evening nears.

His second stay was for many of the same reasons. But by now, his dementia was far along. He recognized his wife, Sally, knew she was safe person, but wasn’t sure exactly who she was. He would wander the halls, muttering nonsensically and repetitively, especially the words “sixes and sevens, sixes and sevens…” He required full assist for all activities of daily living—bathing, feeding and grooming.

Sally was devoted, warm, kind and heartbroken. She was losing her best friend. Their union was a true meeting of souls. She had been a highly respected social worker, but had stopped working years earlier to take care of Harry. She came to visit him every evening around dinnertime. Because he was easily agitated by stimulation, Harry ate in his room. 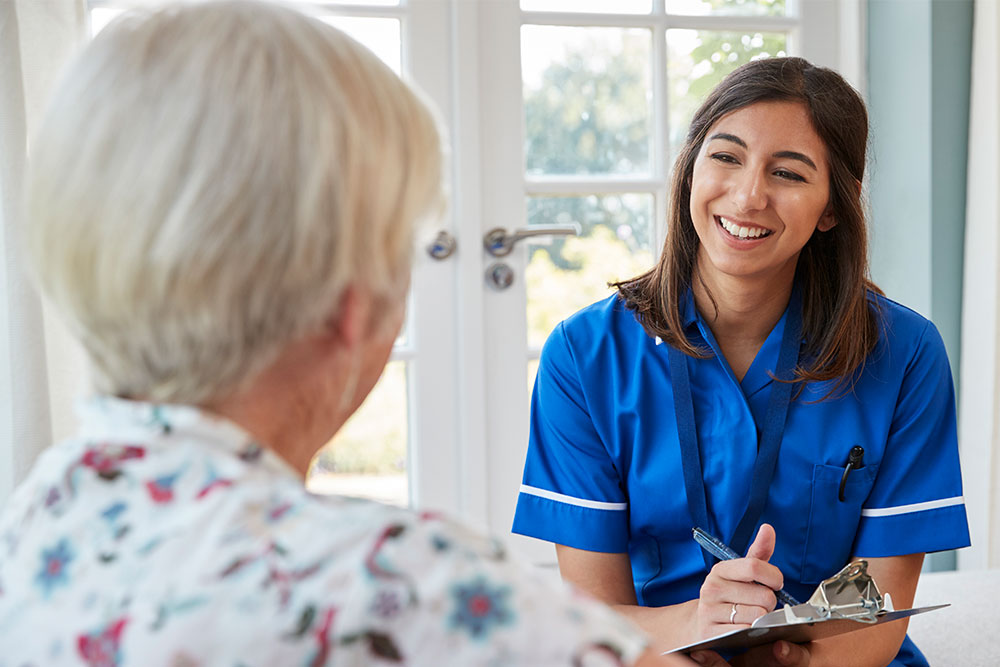 Every evening at around 6pm, I would go in to check on the visit. At first, it was just a check for safety, but soon I would be included in the visit. One evening, about a month into Harry’s stay, Sally mentioned how scruffy he looked, and we decided to give him a decent haircut. I’m an experienced haircutter, so I cut and Sally kept him still… or at least tried to; he was like a small child who has a million other things to do besides sit in a chair and get a haircut. Both of us saw the comedy in the situation, and we bonded over that simple and intimate act of caregiving.

After this shared experience, Sally started to talk to me about their lives together, before his illness. She told me how they loved talking to each other for hours about ideas. She spoke about their son, Ben, and shared all sorts of stories about things going on in her life outside of her visits to Harry. Harry was incapable of responding to Sally, but she still needed to tell him everything, so I became a sort of proxy for him. Sally and I had our own wonderful connection, but I also believe that by speaking to me, she was also talking to him.

These visits went on throughout the summer. Meanwhile, his condition worsened, despite our attempts to find the right medications and time of day for administration. I feared that some of the medications were having side effects that were decreasing his overall conditioning. On admission, Harry had been ambulatory, albeit with moments of unsteadiness. But by the end of the summer, he required full assist with ambulation and he could not lie down flat in bed at night. Adjustments were made to his bed to try to accommodate this. He was eating 100% of his meals with full assist with feeding, but was still losing weight. His speech grew louder: he was doing a lot of self-dialoguing and calling out for “David” repeatedly. We never could figure out who David was.

He was tortured and it was very upsetting to witness. The treatment team met with Sally in late September to discuss the option of electroconvulsive therapy to help with Harry’s agitation, but she declined and told us it was time for comfort care. So comfort care was initiated. His antipsychotic medications were discontinued and his pacemaker was deactivated, although we continued his seizure medication. We measured his discomfort through the pain assessment in advanced dementia scale and he scored a 7-8 out of 10, indicating a lot of pain. Morphine was administered to control his pain and Ativan to decrease his anxiety.

Harry was bedbound for about a week and during this time he became everyone’s patient. We gave him daily bed baths and turned and repositioned him every hour. We refreshed his mouth with glycerin swabs prior to medication administration. Visiting hours were extended so Sally could come and go around the clock.

One early October afternoon, around change of shift, we knew the end was near. Harry’s breathing became very labored and then it suddenly stopped. His face lost its color and his facial muscles relaxed, so he no longer looked like himself. Unfortunately, his son Ben arrived five minutes too late to say goodbye to his father. Sally was calm: by this point she had made her peace with what she knew was inevitable.

Ben was gentle, and although he was a full-grown man, he looked like a frightened child. His face was identical to Harry’s except he had his mother’s darker coloring. Sally wanted to wait for the funeral home to collect Harry’s body, so they sat quietly at the bedside for four hours. When the funeral home employees finally came, they asked Ben and Sally to step out of the room, so I had them wait in our sensory room that has objects that engage all of the senses and has a calming effect on patients. Unfortunately, the funeral home staff left without letting us know. I started to cry as I told Sally that Harry was gone. She comforted me and we were able to cry together.

In healthcare, we often talk about taking care of the patient and the family, but this was the first time I felt this in the truest sense. I’ve always been sensitive to the needs of patients’ loved ones and am always there to support them in any way I can, but the relationship is still a professional one. I felt very connected to Sally and admired her and her dedication to Harry. I appreciated how I got to know him through the stories she told me about him. I think about her occasionally and wonder how she’s doing and whether she has been able to move on.