Perspectives 2020: A Publication of McLean Hospital

In this issue of Perspectives, read about our recent advances in treatment, research, and education. Diane Davey shares details on OCD treatment past, present, and future. Thousands visited McLean’s brain health exhibit at the Nehru Science Center in Mumbai. We are recipients of a grant to help tackle the opioid crisis and are helping patients incorporate their faith into their care. This year’s McLean Award gala dinner honored recipient Selena Gomez.

A Model of Progress: How McLean Treats OCD
In February 1997, when McLean’s residential treatment program for obsessive compulsive disorder (OCD) was launched, there was a general lack of understanding about the illness and a significant lack of effective treatment. In fact, OCD treatments back then could even make patients’ conditions worse, not better. 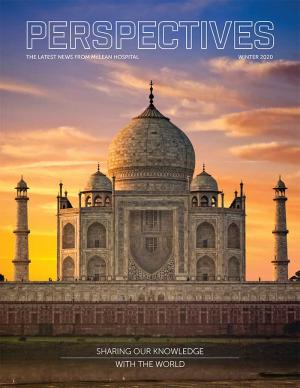 McLean Hospital Is Expanding Public Education Worldwide
While people around the world may speak different languages and have cultures that are vastly different, there is one thing that affects every community: mental illness and the impact it has on individuals and families. Through its international education and advocacy efforts, McLean is striving to increase mental health awareness worldwide while reducing the stigma too often associated with psychiatric disorders. By using a thoughtful, multi-pronged approach that includes public and professional education, McLean is working toward enhancing the overall knowledge of brain health and encouraging compassion and understanding for individuals living with mental health conditions.

McLean Receives Federal Funding to Help Tackle National Opioid Crisis
As part of its efforts to reverse the opioid crisis that continues to grip the nation, the National Institutes of Health (NIH) has named McLean Hospital as a recipient of a grant through the Helping to End Addiction Long-Term Initiative (NIH HEAL Initiative). McLean’s award is one of 375 grant awards across 41 states—totaling nearly $1 billion—made by the NIH in fiscal year 2019 to apply scientific solutions to address the crisis.

Patients Welcome Spirituality and Religion Into Mental Health Treatment
In a recent paper, McLean Hospital clinicians described the success of the hospital’s new Spiritual Psychotherapy for Inpatient, Residential & Intensive Treatment (SPIRIT) program. The clinicians drew their conclusions from a sample of nearly 1,500 patients. SPIRIT is an optional program that is available to all patients who come to McLean for mental health care. It integrates religion and spirituality with mental health treatment. According to the paper, many patients have cited the program as a major factor in their treatment success.

Signs of Hope: Music Video Demonstrates the Power of Togetherness

How COVID-19 Is Affecting Addiction Treatment

END_OF_DOCUMENT_TOKEN_TO_BE_REPLACED

Dr. Brandon Unruh on Living With BPD During COVID-19