Brains Matter raises awareness about mental health issues through fun and educational outreach. We provide opportunities to understand the brain and aim to inspire the next generation of neuroscientists.

Founded in 2016, Brains Matter uniquely combines science, human brain specimens, and great activities. We deliver engaging and effective lessons on the inner workings of the brain.

We provide hands-on activities like interactions with human brain and animal brain specimens. We also host discussions with neuroscientists and individuals living with mental health disorders. Our curricula was developed by McLean Hospital staff to help make psychiatry and neuroscience accessible to all.

The program is adaptable, so we can modify our presentation to address young learners, college and graduate-level science students, or groups of adults, including seniors. 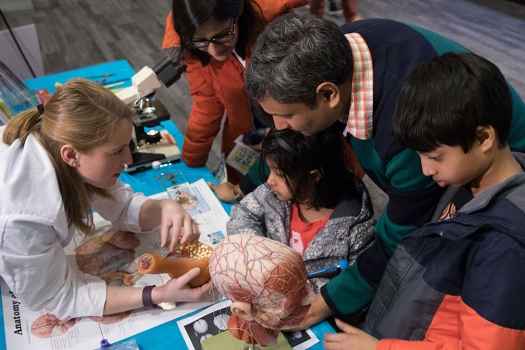 Want to learn more about the human brain and mental health?

Contact us today to schedule a Brains Matter presentation.

Brains Matter presentations feature brain models that people can take apart and try to put back together. We also bring along actual brains, including postmortem human brain samples provided to us by the Harvard Brain Tissue Resource Center and brains from animals to showcase the similarities and differences among species. And, yes, we let people touch the brains.

Presentations are led by McLean researchers, staff, and undergraduate researchers from local universities. Topics touch on how researchers use brain tissue and how brains differ among species. Presenters address current topics in neuroscience and psychiatry research. We also discuss mental health illnesses such as depression, PTSD, and Alzheimer’s disease.

“AMSA had the privilege of hosting Dr. Maddox and the Brains Matter program. Dr. Maddox brought so much to the school, including factoids and lessons and stories—and, yes, brains, including both horse brains and human brains! But she also brought energy and insight and passion… The students raved about the visit.– Dr. Kevin Q. Doyle, teacher of history and psychology, Advanced Math and Science Academy, Marlborough, Massachusetts

When people see what actual brains look like or when they hold them for the first time, their reactions range from disgust and shock to amazement and fascination. The question “Is it real?” can be heard by dozens of people at every event.

People ask where disorders like Alzheimer’s disease “happen” in the brain, and they come to understand that depression, schizophrenia, bipolar disorder, PTSD, and other mental health conditions have a biological basis not unlike physical health conditions. We hope that continued conversations like these will help to alleviate stigma related to mental illness.

Discussing the makeup and functions of the brain and putting people in contact with actual brains sparks questions and conversations about science, research, and mental illness. Through these interactions, we are reminded that there are many questions about the brain we simply can’t answer, and that much more research is needed to help us better understand the brain and treat mental health disorders.

Stephanie A. Maddox, PhD, is the co-founder and director of Brains Matter and an assistant neuroscientist at McLean. According to Maddox, “Engaging the public in candid conversations about our current understanding of the brain and its relationship to mental health is vital. It allows us to work toward continued progress in more effective treatments, potential prevention, and reduced stigma for mental illness.”

Kerry J. Ressler, MD, PhD, McLean’s chief scientific officer, and Maddox created the program when they were at Emory University. At Emory, Ressler was stunned by the high trauma rates that were accompanied by high rates of civilian PTSD, which at the time was primarily associated with the military. Inspired by these observations, Ressler, Maddox, and others began outreach efforts in the Atlanta area to not only raise awareness about civilian PTSD, but also mental health in general. Through various presentations, they realized that many individuals lacked a basic understanding of neuroscience and mental health issues.

Since its launch at McLean, many classrooms and science fairs around the region have hosted the program. Brains Matter has also presented at Boston’s Museum of Science and at the 2017 American Association for the Advancement of Science annual meeting in Boston.

Brains Matter highlights our understanding of mental illness through science. We emphasize current cutting-edge research conducted at McLean and worldwide. The program aims to raise awareness around the social, psychological, and biological factors associated with mental illness. We also promote the importance of science in addressing mental health illness and reducing mental health stigma.

A brain that had the ailment I now suffer
was on display—preserved within a jar,
given with the hope that it would offer
help in understanding what is far
from being understood: the brain’s role in
the ailment they experienced, like me,
crossing now the turf where they had been.
Their gift may help us find a remedy.
I held the brain that once held so much woe,
of someone who, like me, could only guess
where their afflicted consciousness would go,
to other realms or maybe nothingness.
I thank them, and, whatever their belief,
I hope they went to bliss—not just relief.– Poem by Mario, who was inspired by attending a Brains Matter event

According to Ressler, “Many if not most of the public, not to mention students, are not aware of the enormous progress being made toward understanding the brain basis of mental illness. It is thrilling for them to be exposed to this type of outreach and to be engaged in the search toward treating or preventing mental illness and improving mental health.”

Brains Matter has reached thousands of individuals through presentations at: