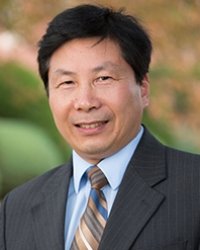 Dr. Lin is currently a grantee of both NIH and Fulbright, with a long-term interest in reducing the prevalence of substance abuse around the world. Dr. Lin’s research focuses on delineation of environmentally related genomic risks for substance abuse, through mapping out molecular pathways that translate external risks into regulated gene activity in the dopaminergic system, and related to addiction. He is also interested in exploiting these risk pathways for medication development.

Prior to joining McLean Hospital in 2006, Dr. Lin was an IRTA fellow and then a research fellow at the National Institute on Drug Abuse Intramural Research Program in Baltimore, and worked as an instructor at the former New England Primate Research Center of Harvard Medical School. He is now director of McLean’s Laboratory of Psychiatric Neurogenomics.

Since 2007, Dr. Lin’s Laboratory of Psychiatric Neurogenomics has been exploring the influence of genes on brain function and how they contribute to neurological or psychiatric disorders. Ultimately, Dr. Lin aims to be able to provide early diagnosis of certain conditions as well as to develop medications that prevent or treat them.

Dr. Lin’s group aims to clarify the regulatory cascades for genes implicated in the pathophysiology of monoamine-related brain disorders. The ultimate goal is to develop novel therapeutic approaches.

The dysregulation of dopamine transmission contributes to several stressor-sensitive brain disorders. These include drug addiction, depression, schizophrenia, and Parkinson’s disease. The molecular pathways leading from environmental stressors to dysregulation in vulnerable individuals are candidates for medication targets.

Among these risk factors is the human dopamine transporter gene (hDAT or SLC6A3). This gene, hDAT, is associated with a variety of major brain disorders, suggesting that various pathways might regulate related hDAT variants. Dr. Lin’s group is interested in how genomic status (DNA sequence polymorphisms, epigenetic modification, and molecular binding) affects the transcriptional activity of hDAT. Specifically, they are working on novel transcription mechanisms in hDAT. The goal is to clarify regulatory mechanisms of abnormal gene expression and link abnormal expression levels to the pathophysiology of the relevant diseases.

The therapeutic potential of elucidating the regulatory cascades depends on identifying transcription factors that bind to polymorphic sites and generating gene knockout and knockin models in rodents. If linked to pathophysiology, these factors can serve as medication targets. Correcting transcriptional activity could restore normal levels of gene expression. These large molecule-based approaches may eventually contribute to the growing field of individualized medicine.

The environment plays a major role in the etiology of major brain disorders, especially addiction. To understand the interplay between the environment and genetics, Dr. Lin is investigating polymorphism-specific environmental regulations including transcriptional and epigenetic mechanisms involved in monoamine (especially dopamine) function.

Aging and environmental factors, such as stressors and drug abuse, likely remodel chromatin in a manner specific to brain regions. Such epigenetic “imprinting” could contribute, in a polymorphism-dependent manner, to the process of addiction and to triggering relapse.

The lab studies the causes of substance abuse at several levels—genetic, genomic, and environmental—and the interactions between them. Some people, for example, carry variants of genes that make them more susceptible to stress in their environments. This can raise their risk of substance abuse.