Read the latest on the breakthroughs that McLean’s researchers are making in identifying the roots of PTSD.

Identifying the Roots of PTSD
Survival. In an animal kingdom enriched by a diversity of species, it is the one trait shared by organisms as simple as worms and as complex as humans. And the proof is in a protein with the hopelessly complex name of pituitary adenylate cyclase-activating polypeptide. 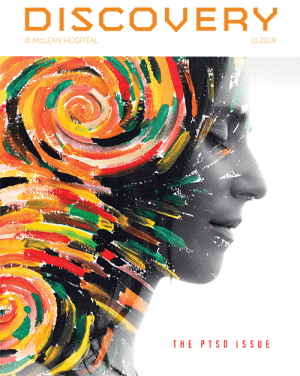 Conte Center Grant Provides Opening to Understanding the Role of Sleep in PTSD
To sleep, perchance to dream. Except when those dreams turn into night- mares replaying a traumatic event from the past. That’s why the study of sleep and circadian rhythm disruption is a central element of the 5-year, $13.5 million research effort at McLean Hospital that hopes to better understand the roots of post-traumatic stress disorder (PTSD).

Using Modern Molecular Research to Better Understand PTSD
The brain—it only weighs three pounds, and 73% of it is water. But the remaining 27% is a dynamic computing machine that contains an estimated 100 billion neurons and has the capacity to generate 23 watts of power across synapses while awake.

Two Researchers Brought Together by One Goal: Identifying Treatment of Anxiety and PTSD
Fight or flight. It’s a basic response to a perceived threat in all animals, from the fly to the human. In complex vertebrates, including mammals, it is controlled by an almond-shaped cluster of neurons in the brain called the amygdala. This cluster regulates both pleasure and fear.

PTSD: More Than Trauma
Studying stress-related factors in animals is an important first step in understanding what ails us and how to fix it. But that research only goes so far, particularly when these factors also confer risk for post-traumatic stress disorder (PTSD) in human beings.

Launching Careers With Coveted K Awards
K awards, which are part of the National Institutes of Health (NIH) Research Career Development Awards, support the next generation of scientists focused on addressing the country’s most pressing biomedical challenges. These awards serve to provide both salary and research for intensive, focused, and expertly supervised research training and career mentorship. K-level mechanisms are most often used to provide a foundation for successful transition into a newly independent research position or to support an individual’s desire to gain extensive and expert training in a new field of specialty.

A Glimpse Into the Future
Moving to a more data-driven practice poses a challenge in a health care system that is moving toward what is thought of as a more cost-effective model of providing the right care in the right place at the right time, one that may no longer focus as heavily on direct contact in a brick-and-mortar environment.