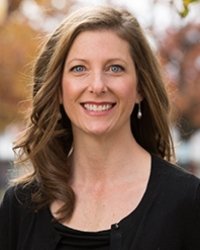 Kathryn Eve Lewandowski, PhD, is the director of clinical programming at McLean OnTrackTM and an associate professor of psychology in the Department of Psychiatry at Harvard Medical School. She also directs the psychotic disorders rotation of the APA-approved pre-doctoral psychology internship program at McLean Hospital/Harvard Medical School. Her program of research focuses on characterization of complex symptom dimensions in psychosis including cognition and reward processing, and psychosocial treatments to alleviate these symptoms. She is also interested in the characterization of neuroprogressive changes over illness phases in psychosis.

Dr. Lewandowski is a member of the International Society of Bipolar Disorders (ISBD) Targeting Cognition Task Force and the International Consortium Investigating Cognition in Bipolar Disorder (ICONIC-BD). She was awarded the 2018 Connie Lieber Science to Practice Award for her work in implementation of cognitive remediation in early psychosis and mania.

Dr. Lewandowski’s program of research centers on the characterization and treatment of cognitive deficits across the psychoses. Cognitive deficits are among the strongest predictors of disability and quality of life in patients with psychosis; unfortunately, most first-line treatments do little to address these symptoms. Cognitive remediation is a behavioral intervention targeting cognitive symptoms through repeated cognitive exercises. With this in mind, Dr. Lewandowski’s group studies the effects of computer-based cognitive remediation on neurocognitive and community functioning in patients with psychosis, including cognitive, functional, and neurobiological outcomes.

Cognitive dysfunction is highly heterogeneous in psychosis. Given its strong association with functional outcomes and neurobiological underpinnings, characterization of cognitive heterogeneity in psychosis may inform prediction, treatment development and implementation, and neurobiological heterogeneity. Dr. Lewandowski’s lab studies computational approaches to the stratification of heterogeneous symptom dimensions including cognition and reward processing across the psychoses. Her group uses both hierarchical and agglomerative methods to study cognitive profiles in patients with psychosis, including associations of clusters to neuroimaging measures and functional outcomes. Dr. Lewandowski’s group is also studying the latent structure of motivation and reward in psychosis in association with clinical, cognitive, and functional measures.

In addition, Dr. Lewandowski oversees research training, reliability, and supervision of neuropsychological assessments conducted in the context of several research projects across the Division of Psychotic Disorders at McLean. She also provides clinical supervision and clinical and research training and mentorship in a variety of contexts, including the psychotic disorders rotation for McLean’s Psychology Doctoral Internship Program, and for junior faculty, post-doctoral fellows, psychiatry residents, research assistants, and undergraduate clinical psychology students.

Social Cognition in Psychosis
by Kathryn Eve Lewandowski and Ahmed A. Moustafa
(Elsevier, 2019)