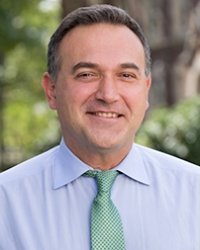 A native of Istanbul, Turkey, Dr. Öngür has a background in neuroscience and clinical psychiatry. He is currently the chief of the Division of Psychotic Disorders, responsible for three inpatient units, a residential facility, a PACT team, two specialty outpatient clinics, and a community support program. In addition to his clinical work, he receives funding from the National Institute of Mental Health and other sources for his research on the clinical manifestations and neurobiology of schizophrenia and bipolar disorder.

Dr. Öngür is currently the William P. and Henry B. Test Professor of Psychiatry at Harvard Medical School and the author of more than 250 articles on research into the neurobiology of bipolar disorder and schizophrenia. He has won awards from McLean Hospital, Partners HealthCare (now Mass General Brigham), and Harvard Medical School for his teaching of medical students and residents and for mentoring. He also serves as the editor of JAMA Psychiatry, a premier journal in the field.

The Schizophrenia and Bipolar Disorder Research Program, led by Dr. Öngür, was founded in 2006 and has grown greatly in scope and depth since then. The long-term goal is to develop new treatments for patients in the Division of Psychotic Disorders, including medicines, computer programs, and early intervention strategies.

Dr. Öngür’s research proceeds on two fronts: clinical course and neurobiology. The clinical course of psychotic disorders are variable and difficult to predict. A deeper understanding of the factors that determine long-term outcomes for individual patients would be valuable in tailoring treatments and deploying scarce resources where they are most needed.

To address this problem, Dr. Öngür’s group at the LEAP Center is collaborating with EPINET, an NIMH-funded national learning health care system in early psychosis.

Dr. Öngür’s group also works to understand brain abnormalities in people with psychotic disorders and to develop new treatment approaches to correct these abnormalities. Schizophrenia and bipolar disorder commonly involve difficulty integrating thoughts and sensory input. In addition, people with these conditions often have abnormal moods, as in depressive and manic episodes.

The following is a sampling of the work in Dr. Öngür’s research program.

Hallucinations are a hallmark symptom of psychotic disorders. They cause significant patient distress and are not fully treated with conventional strategies. Dr. Öngür’s group recently discovered that abnormal interactions between left hemisphere language processing centers differentiate individuals with and without auditory hallucinations.

Higher order cognition depends on interactions among large scale cortical brain networks. The group recently discovered that cortical association networks are less segregated in individuals who have a history of psychosis, with notable disruption in a frontoparietal network involved in executive control functions.

The balance between excitation and inhibition is both energy demanding and computationally essential for maintaining the brain’s robust information processing capabilities.

Using MRS, the research program recently found that ATP synthesis in individuals with schizophrenia is 22% lower than in the general population, a striking difference that might contribute to reduced cognitive function under stress. In addition, the program has found abnormalities in glutamate and GABA, the main excitatory and inhibitory neurotransmitters in the brain, respectively.

Scientists and the gaming industry have collaborated to design computer games and exercises that enhance cognition. Dr. Öngür and his staff have shown that these programs can improve cognition in people with bipolar disorder. This is a promising avenue for functional gains and improved outcomes in independent living and employment.

Dr, Öngür’s researchers have found subtle indications of brainwave abnormality in schizophrenia and bipolar disorder. Combined with emerging insights into brain chemistry and brain function, this moves the field closer to a multifaceted understanding of the brain.