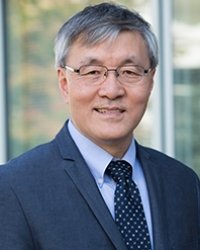 Kwang-Soo Kim, PhD, has over 25 years of experience investigating molecular and developmental neurobiology of the midbrain dopamine neuronal system in health and disease, focusing on elucidating the transcriptional mechanisms underlying development and maintenance of dopamine neurons. Based on basic transcriptional studies of midbrain dopamine neurons, Dr. Kim’s lab identified the orphan nuclear receptor Nurr1 as a potential drug target of Parkinson’s disease (PD) to develop novel drug candidates for neuroprotective and mechanism-based therapeutics. Promising compounds are being generated using established high throughput screening by medicinal chemistry and are being tested in preclinical animal models.

Dr. Kim’s Molecular Neurobiology Laboratory, founded in 1998, studies the biology of brain cells that rely on the brain chemical dopamine to communicate. Major brain disorders such as PD, ADHD, and schizophrenia are related to abnormalities affecting these cells. Parkinson’s, Alzheimer’s, and autoimmune diseases involve damage to specific cell types.

Dr. Kim and his group work to identify the defective components from these cells—like the orphan nuclear receptor Nurr1, which is critical for dopamine neurons and inflammation—in order to understand and reverse the damage. This transcription factor appears to be key to the loss of A9 subtype dopamine neurons of the substantia nigra in PD. Nurr1 represents a potential drug target for associated human disorders, so the lab is exploring promising drug candidates targeting Nurr1 that could potentially slow down PD progression in a mechanism-based and neuroprotective manner. Although Nurr1 is a ligand-independent nuclear receptor, Dr. Kim hypothesizes that Nurr1 may have endogenous ligand(s) and is pursuing to identify and characterize potential Nurr1’s endogenous ligand(s).

In addition, Dr. Kim’s lab pioneered the development of safe, patient-specific stem cells using a new technique—a highly promising breakthrough for treating and studying human diseases. Cell replacement therapies require clinically safe stem cells that can be used to generate many (possibly all) types of cells. Most iPS cells have been derived through the use of viral vectors and are not ideal for the study and potential treatment of human diseases. The lab pioneered the generation of safe human iPS cells via the direct delivery of reprogramming proteins. More recently, Dr. Kim’s lab identified novel mechanisms underlying the reprogramming process through metabolic control, which allowed him to devise more efficient and safer reprogramming methods. The new iPS cells generated using novel methods may represent biomedically- and clinically-ideal cells, providing potential platforms for studying human disease mechanisms and achieving the long-term goal of personalized cell-replacement therapy.

Based on transcriptional mechanisms of the midbrain dopamine neuronal system, Dr. Kim’s lab focuses on developing novel mechanism-based and neuroprotective therapeutics for PD and other neurodegenerative and neuropsychiatric disorders. In addition, the lab’s research into putative involvement of inflammation pathways in neurodegeneration and other conditions such as autism includes studies focusing on the interaction between the immune system and the brain, with the goal of identifying key regulators of neuroinflammation. Remarkably, recent studies from several laboratories including Dr. Kim’s lab identified Nurr1 as a key modulator of (neuro)inflammation functioning as a transcriptional repressor for neurotoxic cytokine production. Indeed, the lab found that small molecules enhancing Nurr1’s function can robustly suppress neuroinflammation and expression of proinflammatory genes in immune cells. Thus, the lab’s approach may hold great promise for potential treatment of (neuro)inflammation-related human diseases both in and outside the central nervous system.

Kim KS. Toward neuroprotective treatments of Parkinson’s disease. Proceedings of the National Academy of Sciences of the United States of America. 2017;114(15):3795-3797.