Marijuana Use Among Young People

What has been the focus of your work?

In addition to work in bipolar disorder and other psychiatric conditions, I’ve spent the last two decades involved in marijuana-related research, in particular, studying the impact of recreational marijuana on a number of different areas, including cognitive performance, brain structure, and function. More recently, I’ve focused on looking at the type and level of changes that result from early exposure to marijuana versus exposure at a later age.

What have you discovered about the impact of early marijuana use?

The results have been striking. Data from our studies and other groups have now demonstrated that chronic, heavy marijuana smokers with earlier onset of use (under the age of 16) show significant changes in brain structure and function relative to those with later onset. They appear to have more difficulty with cognitive tasks, particularly those mediated by the frontal cortex, as well as altered patterns of brain activation and less-organized white matter, the bundles of nerve fibers and myelin that impact how information is communicated from one brain region to another. Interestingly, later onset smokers don’t appear to have the same level of difficulty with frontally mediated tasks and appear more similar to those who have never smoked.

Does the type of marijuana product used make a difference in your findings?

While we’ve looked at age of onset, frequency, and magnitude of marijuana use and done some work exploring the ways that people use cannabis (smoking, vaporizing, dabbing, edibles, etc.) there’s a lot we still have to learn. We’ve recently begun collecting information on the actual products that our subjects use—analyses of the cannabinoid constituents within the products themselves—in other words, how much Δ9-tetrahyrocannabinol (the main psychoactive component in cannabis) is present and what other components are on board (e.g., other cannabinoids like cannabidiol or CBD, which is not common in recreational products as it is not psychoactive). So far, we can say that earlier age of onset as well as frequency and magnitude of use are all related to task performance and measures of brain health. 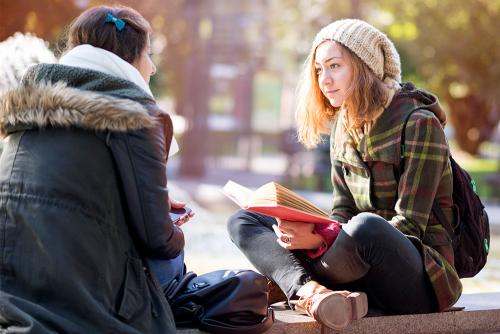 What about those who start early but then discontinue marijuana use?

We are currently following a cohort of subjects who previously smoked marijuana regularly but have discontinued their use. The big question is whether or not the brain “recovers” to the level it was prior to smoking. Given our finding of earlier onset of use being related to lower white matter organization, we are also trying to figure out the ‘chicken or the egg’ or cause-and-effect question—are younger consumers with lower white matter integrity more likely to start smoking marijuana or is lower white matter coherence the result of earlier onset of smoking? While we see an association, it doesn’t address causation, which is best studied using a longitudinal and not a cross-sectional design.

Why is marijuana research so critical at this point in time?

Perception of risk and harm related to marijuana use is at an all-time low among our youth, which may in fact be the result of our ongoing dialogues around possible benefits of medical marijuana. I often have kids and older teens ask me, “How can it be bad? My best friend’s mother takes it as medicine.” You can understand how that would be confusing. In fact, for the first time in 2015, the national Monitoring the Future study reported that more high school seniors smoke marijuana every day than smoke cigarettes. It is important to let them know that during adolescence and teen years, the brain is still under development and vulnerable to many influences, including drugs. In addition, more potent, concentrated forms of marijuana like shatter, wax, dabs, and budder are increasing in popularity and may be more likely to cause negative effects in those who are still developmentally immature, given the very high levels of THC in these products. My work, and that of my colleagues in this field, is dedicated to answering many complicated questions that are designed to help policymakers make sound, fact-based decisions.

This article can also be found on the Huffington Post.

Staci Gruber, PhD, is the director of the Cognitive and Clinical Neuroimaging Core and an associate professor of Psychiatry at Harvard Medical School. Her clinical and research focus is the application of neurocognitive models and multimodal brain imaging to better characterize neurobiological risk factors for substance abuse and psychopathology. She also directs the Marijuana Investigations for Neuroscientific Discovery (MIND) program, designed to clarify the effects of recreational and most recently, medical, marijuana on brain structure, function, and quality of life.

Dr. Gruber is also involved in the application of behavioral science to help shape policies regarding juvenile advocacy. Her ongoing initiative to educate policymakers, judges, attorneys, and the public has had local and national impact.

How Much Do We Actually Know About Medical Marijuana?

One Doctor vs. the DEA – Inside the Battle to Study Marijuana in America

Cannabis and the Brain

Dr. Elizabeth McIngvale on Navigating the Challenges of OCD

Appreciating the Preciousness of Life

Your Face Mask Likely Isn’t the Only Mask You Wear