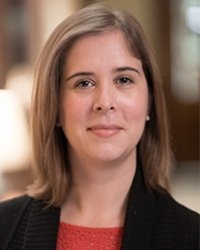 Amy C. Janes, PhD, directs the Functional Integration of Addiction Research Laboratory at the McLean Imaging Center. While she began her research career studying addiction in preclinical models, her current NIH-funded research uses clinical neuroimaging to clarify how individual differences in brain function, chemistry, and structure influence drug use and relapse. She also uses these tools to clarify links between drug use and psychopathology, with the goal of using neuroscience to inform personalized treatment development.

As director of the Functional Integration of Addiction Research Laboratory at the McLean Imaging Center, Dr. Janes uses clinical neuroimaging, like MRI scans, to clarify how individual differences in brain function influence drug use and relapse. Her long-term goal is to help inform the development of personalized treatments for substance misuse that consider differences in brain function and other factors, such as coexisting psychiatric disorders.

A key to her research is the recognition that a treatment, like nicotine replacement therapy, may work for one person but not someone else. Her work is also based on findings that variance in the function of different brain structures may be the key to unlocking individual treatment plans.

For example, Janes’ research involves neuroimaging of the brain’s insular cortex, which is believed to be involved in functions such as consciousness and emotions. Her work has shown that individuals who had greater activation of this brain region in response to smoking cues—before they quit—were likely to relapse, even when treated with nicotine replacement therapy. Her current focus is not only to identify particular groups of people susceptible to relapse, but also to identify what novel treatments may work for such relapse-vulnerable groups.

In July 2019, Dr. Janes was named a recipient of the Presidential Early Career Award for Scientists and Engineers (PECASE). The PECASE is the highest honor given by the U.S. government to scientists and engineers who are starting their independent research careers and show exceptional promise for leadership in science and technology.

Everything You Need To Know About Substance Use Detox

In the Media: Rising Alcohol Use Among Older Adults