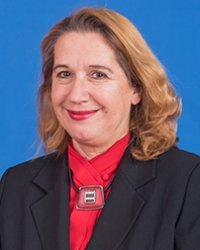 Gordana D. Vitaliano, MD, PhD, is the director of the Brain Imaging Nanotechnology Group, a psychiatrist in the Behavioral Psychopharmacology Research Laboratory, and the medical director of the Developmental Biopsychiatry Research Program at McLean Hospital. Dr. Vitaliano’s research is focused on designing nanotechnology, biomolecular nanorobots, nanolasers, biosensors, molecular imaging tools, and drug delivery systems that can efficiently cross the blood-brain barrier, and diagnose and treat neuropsychiatric disorders better than existing biotechnologies. Her clinical and research work has led to grant funding from the National Institute on Drug Abuse, National Institute of Mental Health, NARSAD, the Sidney R. Baer Jr. and Taplin Foundations, and four issued and 12 pending patents.

Dr. Vitaliano served as an expert in nanomedicine on the President’s Innovation and Technology Advisory Committee (The White House), has contributed to the Dutch Committee, NIH review panels, and has been an invited speaker at NIDA, ACNP, NARSAD, NSF, IBM, and DOD conferences.

For 20 years, Dr. Vitaliano has been researching methods for delivering drugs that can effectively treat neuropsychiatric diseases. Through her work, she attempts to develop methods for addressing a major obstacle in the treatment of psychiatric conditions—the “blood-brain barrier” that prevents drugs from being delivered directly to the brain.

To cross this barrier, Dr. Vitaliano and her colleagues focus on the creation of nanotechnology, biomolecular nanorobots, nanolasers, biosensors, molecular imaging tools, and drug delivery systems.

Dr. Vitaliano’s research career began in the in the early 2000s in the private sector. She was the founding CSO of ExQor Technologies Inc. There, she led a multidisciplinary team that worked to design intelligent nanoscale biosensors, biomolecular nanorobots, nanolasers, molecular imaging tools, and drug delivery systems. Some of the technologies she helped develop at ExQor Technologies were licensed by McLean Hospital. This relationship led her to come to McLean in 2006, where she has continued her research efforts.

At McLean, Dr. Vitaliano’s research has focused on neurodegenerative disorders and neurotoxic diseases in the brain such as HIV with substance use, HIV-associated neurocognitive disorder (HAND), and Alzheimer’s disease (AD).

This research is aimed at the development of nanotechnologies that deliver growth factors to the brain for the purpose of regenerating all or parts of the brain. Her research combines neuropathological, molecular, cellular, biochemical, MRI/MRS imaging, and behavioral methods.

Through her research, Dr. Vitaliano has demonstrated that NPs enhance hippocampal neurogenesis and synaptogenesis and restore memory in mouse models of AD and HAND. This work led her to focus on reversing brain aging and neurodegeneration.

In addition, Dr. Vitaliano is studying the effects of targeted NP treatment on brain connectivity and receptor/transporter densities in dopamine brain regions using MRI theranostics for the purpose of treating HIV-related substance misuse. Other ongoing projects involve the use of new MRI nanotechnologies in mouse models to further the diagnosis and treatment of various neurodegenerative diseases.

Going forward, Dr. Vitaliano seeks to continue her work on neuroprotection and neuroregeneration by receiving FDA approval for investigational new drugs and conducting clinical trials in patients with Alzheimer’s or HIV dementia using her technologies.